The price of auto insurance is once again increasing for Massachusetts drivers, and insurers are laying the blame squarely on technology.
Drivers distracted by their smartphones are crashing their cars more often, and those cars are now more expensive to repair because they’re loaded with sensors and devices.

The inevitable result: higher premiums for consumers, even for those who have not had accidents lately.
“If you have sticker shock, don’t be surprised,” said James Lynch, vice president of research at Insurance Information Institute, a New York-based industry group. “It’s a phenomenon. A number of companies have increased rates.”

Some of the largest auto insurers in Massachusetts have received approval from state regulators to raise their rates on average by between 3 and 6 percent this year, with some drivers likely to see even higher increases. The rate increases will probably affect all customers of those companies, industry officials said.
This is the second straight year of steep increases: Rates in 2016 jumped between 6 to 9 percent, on average.
The average premium paid by Massachusetts drivers was $1,108 in 2014, the most recent data available. Nancy James, an independent insurance agent in Concord, said she started the year by warning clients they are likely to see bigger bills this year, some as much as 10 percent higher.

“I talk to my local body shop and I know how busy they are,” James said. It’s inevitable that insurers would pass that cost to consumers, she said.
Mapfre USA Corp., which has more than 1 million policy holders in Massachusetts, plans to raise premiums by nearly 4 percent starting in May. “We are continuously evaluating our rate level to ensure that we are able to keep up with the increasing cost of accidents and balancing that with providing a very competitive product,” said Patrick McDonald, executive vice president of business and clients at Mapfre USA Corp., the largest auto insurer in Massachusetts.
But in addition to the increase in claims, insurers’ have also been waging a fierce battle for customers by offering lower rates, which has resulted in them collecting less in premiums. And the long period of low interest rates has not helped, as it limits returns on investments that insurers use to cushion business ups and downs. 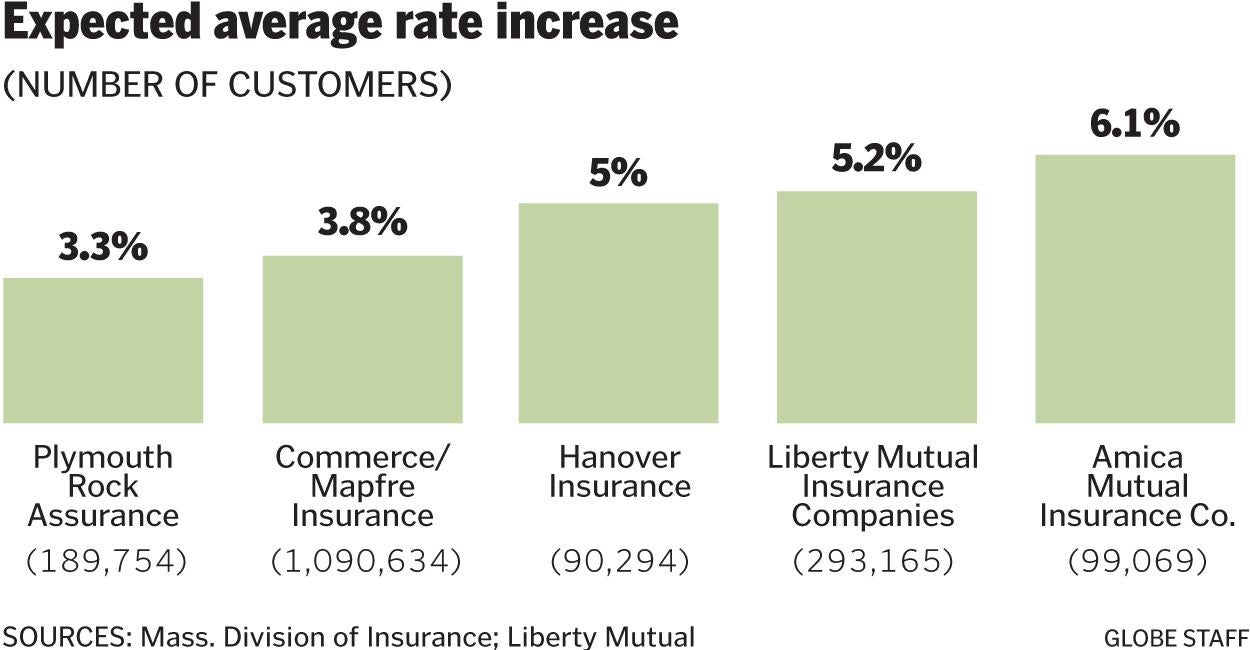 Insurance specialists said it is difficult to peg just how much distracted driving — specifically mobile phone use — contributes to rising accident claims. They say drivers who have had accidents are reluctant to admit they were texting or using their phones at the time.
Still, it’s clear that drivers are spending plenty of time on their mobile devices while behind the wheel.
TrueMotion is a Boston company that makes an app that tracks how much drivers use their phones. In its most recent data covering 18,000 users, TrueMotion found that drivers spent 20 percent of every trip on a call, holding their phone, or texting and scrolling through social media.
The National Highway Traffic Safety Administration said fatalities attributed to distracted driving, which includes texting, fiddling with GPS, even eating, increased by 8.8 percent in 2015, the latest year available.

‘I would characterize distracted driving as a big factor. It’s resulting in more accidents out on the road.’

Those incidents helped reverse a long-running decline in automobile-related fatality rates. In 2015, the overall number of motor vehicle fatalities in the United States increased 7.2 percent, the largest jump in half a century.
The Massachusetts Division of Insurance, which reviews rate requests to ensure they are justifiable, said it has noticed companies reporting higher property damage claims.
“I would characterize distracted driving as a big factor,” said Chris Goetcheus, an agency spokesman. “It’s resulting in more accidents out on the road.”
Other factors are also driving rates up, particularly the increasing amount of technology packed into cars these days, such as sensors that monitor and measure nearly every aspect of performance. Just fixing a damaged bumper cost $1,705 more in 2016 than it did two years earlier, according to Boston-based Liberty Mutual.
A simple windshield replacement that used to cost about $350, now involves higher-quality glass and connections to the car’s sensors, and costs twice as much, said Joe Salerno, vice president of claims at Quincy-based Arbella Insurance Group.
He also pointed out that more cars are made from aluminum, instead of steel, bodies; that softer material requires more-expert mechanics to repair.
Manufacturers are also bringing the sophisticated safety features that used to only come in luxury lines, such as systems that keep motorists from veering into another lane, into everyday models. But Salerno said those new technologies have not yet come into wide enough use to help improve traffic safety.
“Traditionally what we would hope to see with all these advanced driverless systems, is we would hope to see a decline the frequency of accidents,” Salerno said. “But because of the small penetration, we’re not seeing the benefits.”
Automobile coverage, which used to be a reliable profit-maker for insurance companies, has become far less so in recent years, with more drivers on the road texting, talking, and plugging directions into their phones.
The bottom line: Many insurance company profits have taken a whack.
Illinois-based State Farm Mutual Automobile Insurance Co., the country’s largest auto and home insurer, recently disclosed that its profits for 2016 plummeted by 94 percent, to $400 million, from $6.2 billion the previous year, due to auto accident claims.
The Travelers Companies Inc. reported earlier this year that car insurance claims for 2016 were nearly 840,000, an 11 percent increase from the prior year. Travelers said it is now considering rate increases.
Across the nation, between 2014 to 2016, the frequency of collision claims rose by 2.6 percent, after years of decreases, and their severity, or cost, increased by 8 percent, according to the Insurance Information Institute.
A decade ago, companies spent 98 cents on claims and medical costs for every $1 in premiums; in 2015 the industry spent $1.05 for every $1 they took in, according to the insurance research group.
“Insurers will need to adjust their pricing to reflect this new reality,” said Mapfre’s McDonald. 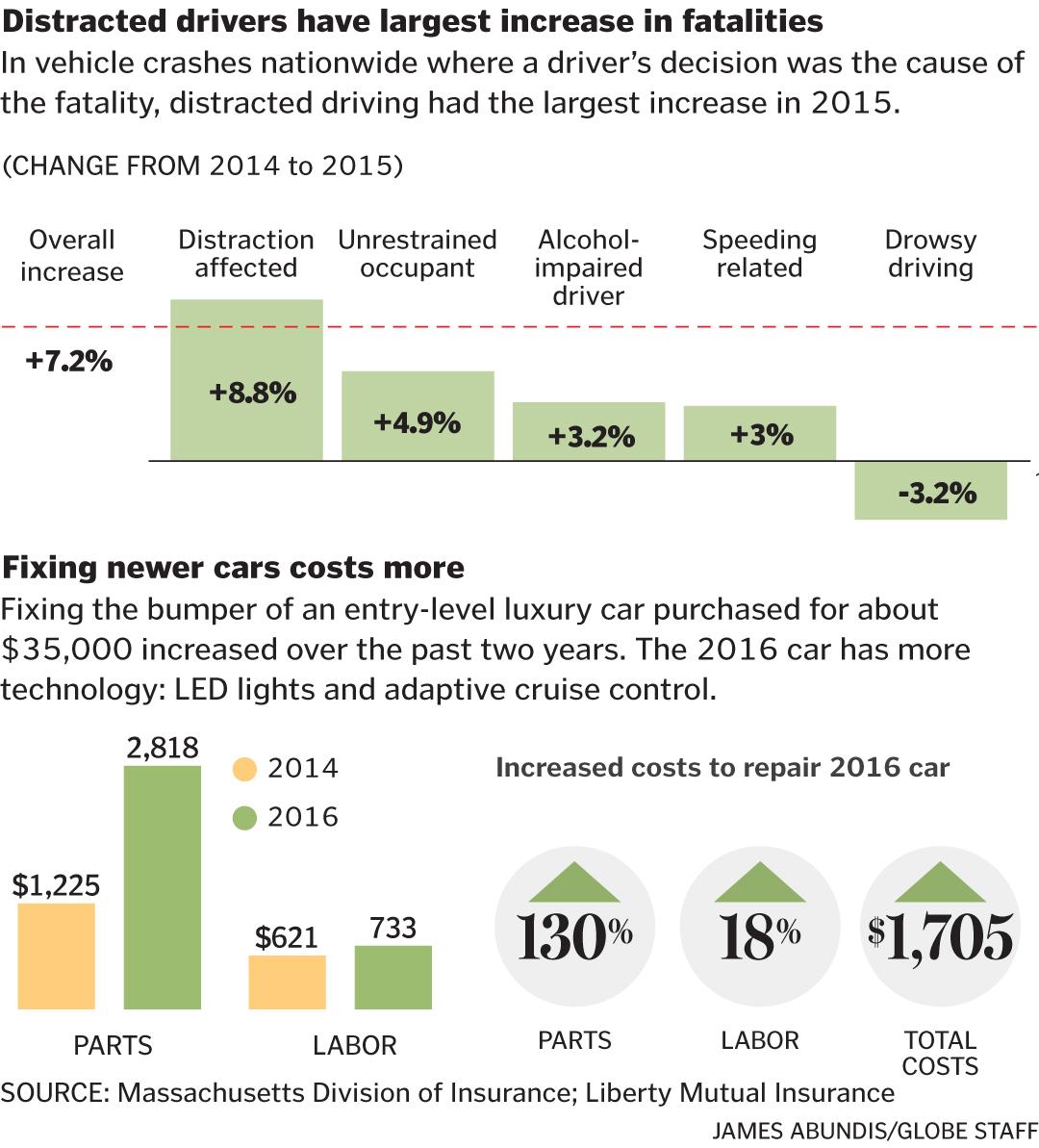