DETROIT — The record pace of auto sales in the United States is slowing down, leaving investors increasingly bearish on auto stocks.

But there is one exception. Tesla, the electric-vehicle upstart, continues to surge.

On Monday, Tesla surpassed Ford Motor in market value for the first time and moved within striking distance of General Motors, starkly illustrating the growing gap in investors’ optimism over its future versus the prospects for the traditional carmakers from Detroit.

While G.M. and Ford may have strong profits and healthy balance sheets, Tesla offers something Wall Street loves much more: the potential for dramatic growth.
“Investors want something that is going to go up in orders of magnitude in six months to six years, and Tesla is that story,” said Karl Brauer, a senior editor at Kelley Blue Book. “Nobody thinks Ford or G.M. is going to do that.”

Tesla’s chief executive, Elon Musk, has shattered the conventional wisdom that automakers should be viewed as a stable, reliable investment. Instead, he promotes his California-based company as a dynamic vehicle for growth, despite the risks and challenges ahead of it.

In his vision, Tesla is going to change the world, and is primed to cash in on the two transformative trends in the industry: the shift to electric vehicles as part of a broader societal move to cleaner energy, and the advent of automated driving.

At the end of Monday’s trading, Tesla reached a market capitalization of $48.7 billion compared with Ford’s $45.6 billion, according to Bloomberg. General Motors was at $51.2 billion.

Tesla’s market milestone came at the intersection of two countervailing trends. On Sunday, Tesla said its first-quarter sales were up 69 percent from the same period a year ago. On Monday, monthly sales figures for the conventional automakers showed them struggling to meet last March’s performance.

That sent stocks in the Detroit automakers down for the day — G.M. was off 3.4 percent and Ford 1.7 percent — while Tesla’s stock soared by more than 7 percent.

Despite the recent boom years for the American motor industry, in which G.M. and Ford have been the biggest beneficiaries, executives are working overtime just to convince Wall Street that their business model can produce incremental improvements.

Mr. Brauer said that reception was unfortunate for G.M. and Ford because “the reality is, they’re as financially healthy as they’ve ever been, and they’re in very good position for the future.”

Both companies have rebounded steadily since the recession, although G.M. needed a bankruptcy filing and $49 billion government bailout to recover. And both have taken advantage of the pent-up consumer demand for new vehicles in recent years, especially for pickup trucks and sport utility vehicles.

But neither automaker has convinced Wall Street that it has shed its boom-or-bust reputation tied to broader economic cycles, or is at the forefront of new technology being developed for self-driving vehicles and electric cars.

The Detroit automakers are hardly sitting still in their efforts to improve current results and future prospects. G.M. made the momentous decision recently to sell its money-losing European division, and Ford is adding jobs to accelerate its shift toward electric and autonomous vehicles. Both automakers have bought technology companies to bolster their in-house engineering expertise, and their executives have embraced the chance to work with the Trump administration on scaling back government regulations.
All the same, both companies are ranked near the bottom in price-to-earnings ratios for the companies that make up the Standard & Poor’s 500 index.

Last week, one of G.M.’s large investors, the hedge fund Greenlight Capital, proposed the creation of two classes of stock — one that strictly pays dividends, and a second tied directly to earnings and future growth in areas like self-driving cars and ride-hailing services.

G.M. directors flatly rejected the idea as too risky, and the chief executive, Mary Barra, said there was no need to deviate from “executing a plan that is delivering record financial and operation results.” Yet while industry analysts generally supported the decision, G.M.’s share price barely budged on the news that it was staying the course. 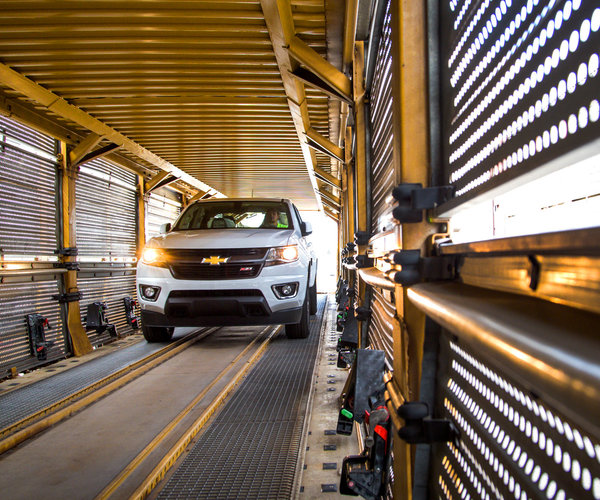 And Monday’s data, showing total industry sales off 1.6 percent, underscored that overall demand for new vehicles is slipping despite a bevy of discounts and incentives. G.M. showed a slight gain from the prior March, while Ford sales fell sharply. Several other automakers, such as Toyota, Fiat Chrysler and Hyundai, also reported declines.

But it was the growth and the outlook, not the raw numbers, that moved the markets. Investors tend to look at Tesla as a technology start-up rather than an automaker.

“It’s almost like Tesla is positioned in people’s minds as an energy storage company that happens to put most of its batteries on wheels,” said Andrew Stewart, chief investment officer at Exchange Capital Management, an investment firm in Ann Arbor, Mich.

Tesla is also prone to more volatile stock movements because Mr. Musk and other board members and top executives own a large chunk of shares, leaving a relative few that change hands frequently, he said.

“Whenever there’s interesting news, the people trying to buy are buying from a limited number of people who are willing to sell,” Mr. Stewart said. “While you have Ford and G.M., and they’re these decades-old, more-institutional industrial companies.”

Because of Tesla’s acclaim and the limited number of shares being traded, the company draws more individual investors, and its share price tends to spike whenever Tesla or Mr. Musk makes news.

This week’s jump in its stock price was set off by a brief news release on Sunday that said Tesla had delivered more than 25,000 cars in the first quarter, exceeding analysts’ estimates.

While Tesla may enjoy the favor of investors, it still faces some daunting hurdles to reach its goals. This summer, the company is supposed to start making the Model 3, a compact electric model that Tesla plans to sell for $35,000 and produce in significantly higher volumes. It currently offers two vehicles, the Model S luxury sedan and the Model X S.U.V., both of which sell for $90,000 or more when options are added in. (People who buy its cars benefit from a $7,500 federal tax credit on environmentally friendly cars, a selling point with an uncertain future.)
Once Tesla begins producing the Model 3, Mr. Musk expects production to ramp up quickly, with a goal of making 500,000 cars a year by 2018. Achieving that target will not be easy, Mr. Brauer said. “That’s five times growth in volume,” he said. “I don’t know of any car company that’s ever done that in a two-year period.”