North America President Mark Reuss today officially announced two needed additions to the General’s Cadillac lineup: a compact BMW 3-fighter, smaller than the CTS, and a replacement at the other end size-wise for both the STS and DTS.
Reuss also released the sneak peek sketch above of the new small Caddy.
Reuss, speaking at the Center for Automotive Research’s annual industry seminars, said the new big XTS will launch in the spring of next year and the entry-level sports sedan “codenamed” ATS according to GM (is BTS a contender?) will roll out next summer.
GM has been scrambling with announcements of new products to fill the bankruptcy-induced gaps in the pipeline and Caddy, which saw sales decline 26% in July, needs some new blood.
“GM has moved beyond a stage of simply surviving and is now clearly focused on thriving with a line-up that’s stronger in more segments than it has ever been,” Reuss said in a statement.
The XTS will give Caddy a up-to-date entry in big luxury cars (though Drive On confesses to long admiration of the old but proven DTS for its space and unapologetic, old-fashioned luxury comforts). It is based on the XTS Platinum Concept (below) unveiled at the 2010 Detroit auto show. Based on the same platform as the Buick LaCrosse, it will be front-drive, bit also offer all-wheel drive system.
The (codenamed) ATS will be rear-drive and is aimed to go head-to-head with — and is being benchmarked against in development — the entry-level European premium sport sedans: the BMW 3-Series, the Mercedes-Benz C-Class and Audi A4.
“ATS is being developed to be a driver’s car on an all-new Cadillac-specific RWD-AWD architecture,” Reuss said. “We have extensively and exhaustively studied the competitive segment, and we have benchmarked the best.”
As GM notes in the announcement, this is the biggest sales segment for premium cars and Cadillac needs a contender to catch those aspiring upscale buyers.
“The XTS continues Cadillac’s heritage as the leader in large luxury cars.” Reuss said, “while the car we’ve codenamed ATS starts a new chapter for Cadillac in the luxury market’s C-segment. We’re confident it will attract luxury car buyers who previously would not have considered Cadillac.”
The jobs impact: GM is investing $117 million to make the XTS at its Oshawa, Ontario, Canada, plant where 400 jobs will be created or retained.The plant now makes the Chevy Camaro, Equinox and Impala and the Buick Regal. GM is spending $190 million to build the (codenamed) ATS at its Lansing (Mich.) Grand River plant for 600 new or retained jobs. It already makes Cadillac’s CTS line. 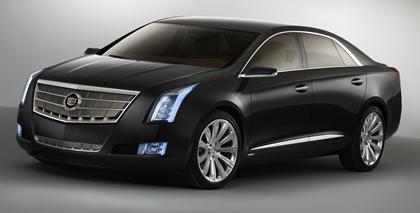