The Joy of Six: Formula One overtakes

From Piquet’s signature move to an audacious pass by Mansell, via Villeneuve’s tussle with Arnoux and more – half a dozen pedal-to-the-metal moments

“It was a great overtaking manoeuvre,” Mika Hakkinen said after winning a breathtaking Belgian Grand Prix. “I loved it.”
Hakkinen had arrived at Spa on top of the drivers’ championship standings and on course for a third successive world title with an understanding of exactly what made his McLaren tick. His closest rival was a 31-year-old Michael Schumacher desperate to add a third world title, five frustrating years after his second.
Hakkinen began the race on pole but a minor spin in the wet allowed Schumacher to pass and grab the race lead. The Flying Finn gave chase and with three laps to go, as he approached the bottom of the eye-popping climb through Eau Rouge, he took a gamble – at which point Mika takes up the story himself:
“It was a big risk, but it was a calculated risk,” Hakkinen later wrote. “I was going to take Eau Rouge flat. In those days, taking Eau Rouge flat was not something for the faint-hearted. The penalty for getting it wrong was usually an enormous accident. Worse still, the track was still damp off-line, so I knew I would have to be millimetre-perfect – not an easy thing to be in the world’s most daunting corner, foot to the floor, powering through the apex towards a blind exit. 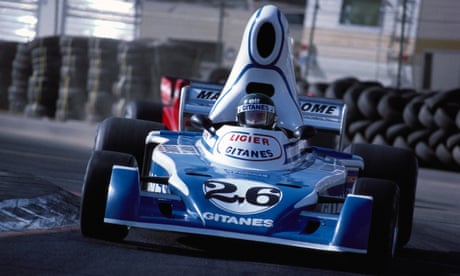 “I decided to count to three, daring myself to keep my foot planted on the loud pedal as I counted, knowing that by the time I got to three I would either have taken Eau Rouge flat or would be in the barriers.
“‘One,’ I said aloud, and the car began to tremble, assaulted by tremendous g-forces, both lateral and compressional … ‘Two,’ I gasped, sawing at the wheel as the car pitched first this way and then that. For a split second, right in the middle of the corner, I thought I could not hold it. The car was absolutely on tippy-toes, but then it gripped, and clung on.
“’Three,’ I yelped, just as the car went scarily light on the exit of the corner. I had done it. I had taken Eau Rouge flat, in a race not in a qualifying session, with only a very narrow dry line on which to do it.
“Michael had clearly not taken Eau Rouge flat, because I was now catching him at a rate of knots. As we approached Les Combes, I spotted Ricardo Zonta’s BAR-Honda which we were about to lap. I thought: ‘Whichever way Michael goes, I’ll go the other.’ He went to the left, so I went to the right, braking as late as I dared, off-line, on a still-damp track, at 300km/h (186mph). As I turned in, I had done it; I had passed Michael. I had retaken the lead.”
It was a beauty to watch in full flow, but although Hakkinen won the race it didn’t count for much. Schumacher won the final four races of the season to steal the world championship away, the first of his five successive titles, and it would be nearly a year until Hakkinen won again.

Attempting to overtake on the streets of the Singapore Grand Prix is a little like trying to pass someone lugging two heavy-duty suitcases up the world’s longest escalator: you’re stuck, hemmed in by metal walls until they get off. But perhaps if you were to barge through with arms flailing like an unpredictable drunk, they might get out of your way. Enter Felipe Massa.
Massa’s frustration is palpable in the onboard footage as his Ferrari tails the Williams of Bruno Senna around the tight Marina Bay Circuit; try as he might, he cannot find a way through a queue of cars snaking obediently around the track. Each time he tries to power out of a corner and past Senna, the faster Williams kicks away. His agitation is growing.
Those emotions fuel Massa’s manic decision as they approach turn 13. He lunges his Ferrari into the tiniest of gaps between metal barrier and Senna, visibly battling with his steering wheel to keep his car from colliding with either. Senna pulls away alarmed by the loose cannon which has appeared beside him, but somehow Massa manages to keep control and prevent his car spinning off into the night, before cooly taking the left turn on the inside and leaving Senna to file in behind, all hemmed in.

In among Mexico City’s dusty eastern sprawl lies the Autódromo Hermanos Rodríguez. The track was named after the driver Pedro Rodríguez and his brother Ricardo, a rising star who died in practice for the 1962 Mexican Grand Prix when his Lotus failed at the fast Peraltada corner and slammed into the barriers. The 20-year-old’s death left Mexico in mourning, and it gave the bend a fearsome reputation.
In those days the approach to Peraltada banked intimidatingly into the arcing 180-degree right hander like a velodrome. It was a high-speed turn and pushing its limits without exceeding them was one of the most difficult challenges in Formula One; Ayrton Senna was another to lose control there in 1992, walking away unhurt after his car hit the barriers and flipped. 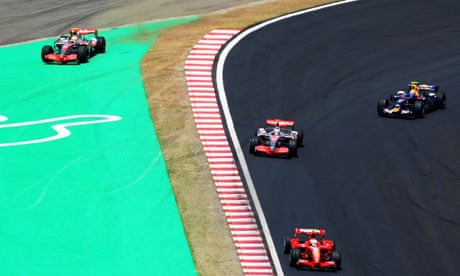 Nigel Mansell was in third place during the last lap of the 1990 Mexican Grand Prix when he approached Peraltada twitching in Gerhard Berger’s wing mirrors. As Berger took the racing line, Mansell fearlessly slung his Ferrari around the outside, forcing the Austrian to submit rather than try and hold off his rival at 150mph on a bend. Mansell glided around the extremities of the turn before crossing the line in second place.
“That was sheer lunacy at its best,” Mansell later said. “I think Gerhard was surprised — it’s not a manoeuvre you do. It’s an outrageous manoeuvre and I think he backed out because he thought there was probably going to be a big accident that he might be involved in. The element of surprise was key. If you take someone’s wind out of their sails, especially when you’re driving a car at those speeds, and then the car has a wobble as well, then any normal, sane person would back out of it. To get him back was fantastic. It was probably one of the most daring overtaking manoeuvres in F1 history.”
Twenty-five years after he had conquered Peraltada, Autódromo Hermanos Rodríguez renamed its most feared corner the Nigel Mansell Turn.

The final two laps of the 1979 French Grand Prix produced the sort of duel rarely seen in modern Formula One. Home favourite René Arnoux swapped places with Gilles Villeneuve in a mesmerising game of cat and mouse, one cutting in front before making a mistake and allowing the other back through. A packed French crowd were desperate to see Arnoux’s Renault prevail but the Canadian Villeneuve would not let him get away.
On the 80th and last lap of the race, Villeneuve locked up his Ferrari entering the first bend and Arnoux pounced on the chance to take the tighter line. What followed was a high speed wheel to wheel battle in which they made contact three times, Villeneuve slid off the track on two occasions and at one moment Arnoux raced across the grass. Eventually Villeneuve made the telling pass at Parabolique – an uphill right-hander – with a bold dive up the inside which he barely made stick, and clung on with Arnoux fixed to his tail all the way to the chequered flag.

Never one to shirk a confrontation, Nelson Piquet threw everything at the sport’s rising star Ayrton Senna during the 1986 Hungarian Grand Prix. It had been a fractious season for Piquet as his relationship with his Williams team-mate Nigel Mansell neared boiling point, something which was hurting their world championship fight with the consistently quick Alain Prost and the man winning pole after pole, Senna. As Formula One made its first appearance behind the Iron Curtain it was yet again Senna who began on the front of the grid, and Piquet was determined to hunt him down.
Twice Piquet boldly overtook his younger fellow Brazilian during the opening laps and twice Senna hit back immediately. As they began lap 57 a by-now desperate Piquet snuck a look down the inside, forcing Senna to cover the centre of the Hungaroring pit straight, which opened the slenderest of gaps around the outside. Piquet towed Senna’s Lotus, then attacked using every inch of track and a little grass to tear into the lead. As they sped into turn one Piquet appeared to have hit the brakes too late, but he recovered with a drift and slide through the corner like something from a rally circuit, completing an astonishing pass while cutting off any opportunity for Senna to counter again.
It was a moment of masterful poise first learnt on the karting tracks of Brasília, and the move soon became legendary. Prost would go on to win the 1986 world title but Piquet, a then-double world champion who felt underappreciated by his sport, had reminded a precocious Senna and the F1 world of his talent.

Hakkinen’s pass on Schumacher was special in part because he did not take his foot off the floor through Eau Rouge; 11 years later Mark Webber did the same while racing wheel to wheel with Fernando Alonso. The pair emerged from the pits with Webber tight behind Alonso’s rear wing and they rounded Spa’s tight turn one, La Source, in convoy. Webber slipstreamed and then pulled alongside Alonso as they accelerated down towards one of the most demanding corners in Formula One side by side. They climbed through Eau Rouge’s swinging bends at 170mph and by the time they’d reach the top, Alonso had relented.
Afterwards Webber admitted that he would not have tried his high-risk move alongside a less skilful driver. “It takes two guys doing a good job to get all that right,” said Webber. “It’s more rewarding when you can do it with someone like Fernando because he’s a world-class driver and he knows when enough is enough. Obviously my attitude might have been a bit different with someone else, let’s say.”
Source: The Guardian