The automotive industry’s seemingly inexorable drive towards electric cars – and especially Chinese polices pushing new energy vehicles – has forced Toyota Motor Corp, the world’s No.2 automaker by sales, into what one executive calls an “agonizing” strategy U-turn.
Until recently, Toyota was one of the industry’s major hold-outs against full electrification, and planned to more or less skip all-electric battery cars and turn instead to hydrogen as a mainstream alternative to gasoline-fueled cars.
In 2013, Toyota Chairman Takeshi Uchiyamada, father of the gasoline-electric hybrid Prius, told Reuters the hydrogen car was a “practical alternative” to the traditional combustion engine, and if there was any use for the electric vehicle (EV),it was “only as a neighborhood errands car”.
Fast-forward to late last year, and Toyota said it had begun developing a long-range all-electric battery car, which industry experts say should hit the market around 2020. The Japanese firm has put its president, Akio Toyoda, in charge of a new unit called the EV Business Planning Department.
One Toyota executive, who did not want to be named as he is not authorized to speak to the media, said the strategy about-turn was “agonizing” and “heart-wrenching”.
Toyota had for some time predicted conventional hybrids and plug-in hybrids would be a medium-term bridge to hydrogen-powered cars of the future. 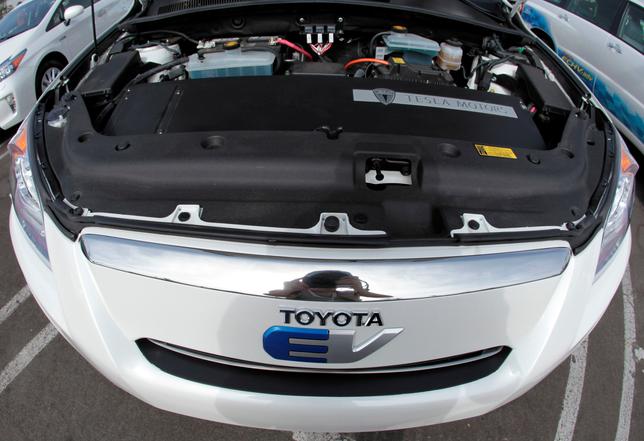 FILE PHOTO: A Toyota RAV4 EV car with a Tesla battery is seen at the sixth annual Alternative Transportation

In late 2014, Toyota launched the Mirai, a hydrogen fuel-cell car, selling in Japan for 7.24 million yen ($66,636)before subsidies and rebates. The model retails in the United States at $57,700 before subsidies.
The game-changer for Toyota is China – the world’s biggest market and one where tough policies to push cleaner energy cars have challenged global automakers.
Latest draft proposals from Chinese policymakers, released in September, require 8 percent of automakers’ sales to be battery electric or plug-in hybrid vehicles by next year, rising to 10 percent in 2019 and 12 percent in 2020.
After some industry push back, the scale and pace of those plans may shift, but Toyota and other automakers don’t see much changing fundamentally in China’s drive to electrification by around 2020.
“Those mandates are tough to the point it could wreck our fundamental business case,” said another Toyota executive.
Toyota is particularly exercised by China’s proposed policy move to categorize conventional hybrids, like the Prius, as gasoline-fueled cars. That would mean conventional hybrids would not generate what China calls new-energy vehicle (NEV)credits, which automakers could use to meet strict fuel economy rules.
Under the proposals, each hybrid an automaker would sell inChina would set them back by one NEV credit point. “The Prius and other hybrid cars are central to our green car strategy,” said one of the Toyota executives.
“But in China’s view, the Prius is no more than a gasoline car. We have no choice but to get over our EV allergy and come up with an electric car.”
Hiroji Onishi, the head of Toyota’s China business, said on Tuesday ahead of this week’s Shanghai auto show that the Japanese firm would start selling plug-in electric hybrid cars in China next year, and aimed to sell an all-electric battery car in China, but gave no time frame.
At a briefing on Wednesday, Onishi said this wouldn’t mean Toyota will de-emphasize sales of conventional gas-electric hybrid cars in China.
Because automakers in China are expected to have to meet stringent fuel-economy requirements in addition to new energy vehicle quotas in coming years, Toyota will try to sell more conventional hybrids in an effort to meet fuel economy requirements, he said.
Toyota sold close to 300,000 vehicles in China inJanuary-March, up 1.7 percent on the same period a year ago.
Source: Reuters