Like a lot of families with high school juniors, we spent Spring Break this year touring college campuses. Since we were headed to southern California, it was also a great opportunity to try out a Tesla Model X SUV, which is a rarity in Michigan, where I live, because Tesla’s direct-to-consumer retail stores are illegal under the state’s dealer franchise laws.
Our loaner model, a top-of-the-line Model X P100D priced at $159,000, was unquestionably one of the most remarkable vehicles I’ve driven. From its massive 17-inch touchscreen to its eye-popping, falcon-wing doors and its panoramic windshield that extends way past the conventional roofline, everything about the Model X is over-the-top.
That includes, of course, its electric powertrain, which, in ludicrous mode, can go zero to 60 miles per hour in an astonishing 2.9 seconds. (Not that you ever get the opportunity to go ludicrously fast in L.A. traffic. But I get the feeling that what matters with this car is just that you could if you wanted to.)
For us, the Model X was simply a very comfortable and capable transport wagon for the most mundane of purposes: a family road trip.
The Model X literally invites you to take it for a spin: the driver’s side door opens automatically when the driver approaches. (That could very well be my favorite feature.) The falcon wing doors take a little more coaxing – it took us several tries to master the amount of force needed to activate the recessed door handles – but once activated, the doors rise, gracefully and silently, up and out of the way, inviting second-row passengers to enter and make themselves comfortable in the sculpted black leather, pedestal-mounted seats. Even third-row seating is easily accessible through the gaping door opening.
The falcon doors are an amazing bit of technology that draws stares even in Hollywood (much to the embarrassment of my teenage daughter, I discovered). Sensors in the doors detect nearby objects and adjust the opening angle accordingly. In tight spaces – or when someone is standing close to the vehicle – the doors stop short of fully opening, a fact that’s well worth taking note of; Both my husband and my daughter learned this the hard way with a clunk on the head.
Driving the Model X is delightful: like all electric vehicles, the battery supplies instant torque for smooth-yet-silent acceleration. Its high seating position (not to mention that enormous windshield) offers great visibility but you don’t feel like you’re driving a huge SUV, even though the Model X is only about six inches shorter than a Chevrolet Tahoe. 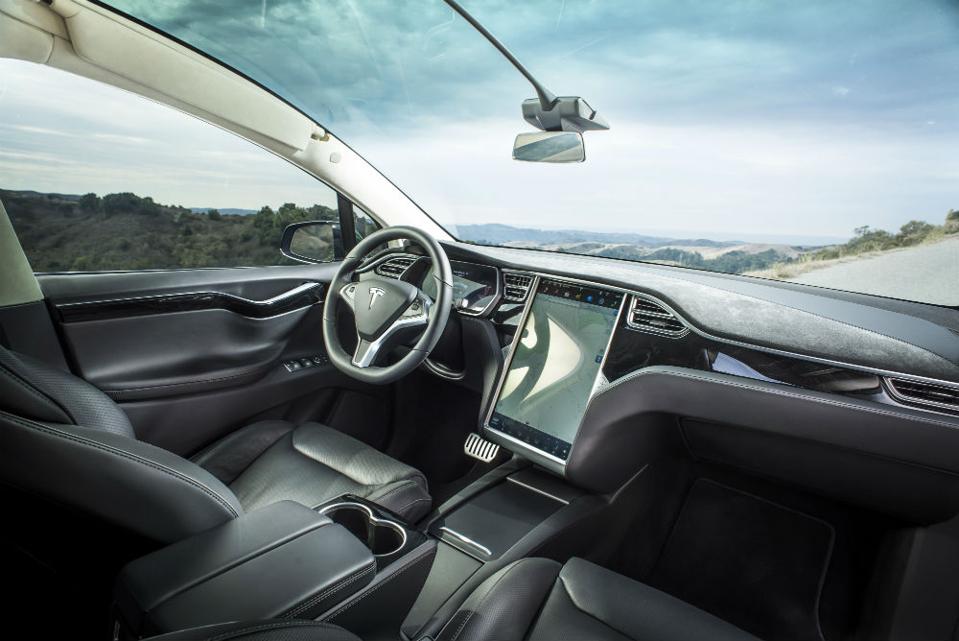 The flat battery is like a skateboard stored under the floor, which opens up lots of storage space, including the “frunk” where the engine compartment is located in ordinary vehicles. That battery layout also lowers the car’s center of gravity, making it drive more like a sports sedan than an SUV.
The big question I had about driving the Model X was charging. Would we be able to get where we needed to go without worrying constantly about running out of battery power?
This turned out to be less of an issue than I expected. Many hotels have courtesy chargers, but ours didn’t. Still, with its big 100-kWh battery, the Model X has an exceptional 289-mile range so we were able to cover a lot of ground without charging. In two days, we visited the campuses of UCLA and USC, explored several beaches, ate lunch in Hollywood, dined beachside in Venice and even squeezed in a fun tour of Warner Brothers’ studios – all with electrons to spare.
On the third day we planned a 100-mile excursion up the coast to Santa Barbara so we had to start strategizing. There was a Tesla Supercharger about a mile away from the hotel, so my husband got up early to juice the car, while my daughter and I slept in. While he read the paper in the vehicle, other Tesla owners came and went, using the time tethered to the station to check email or make calls on their smartphones. 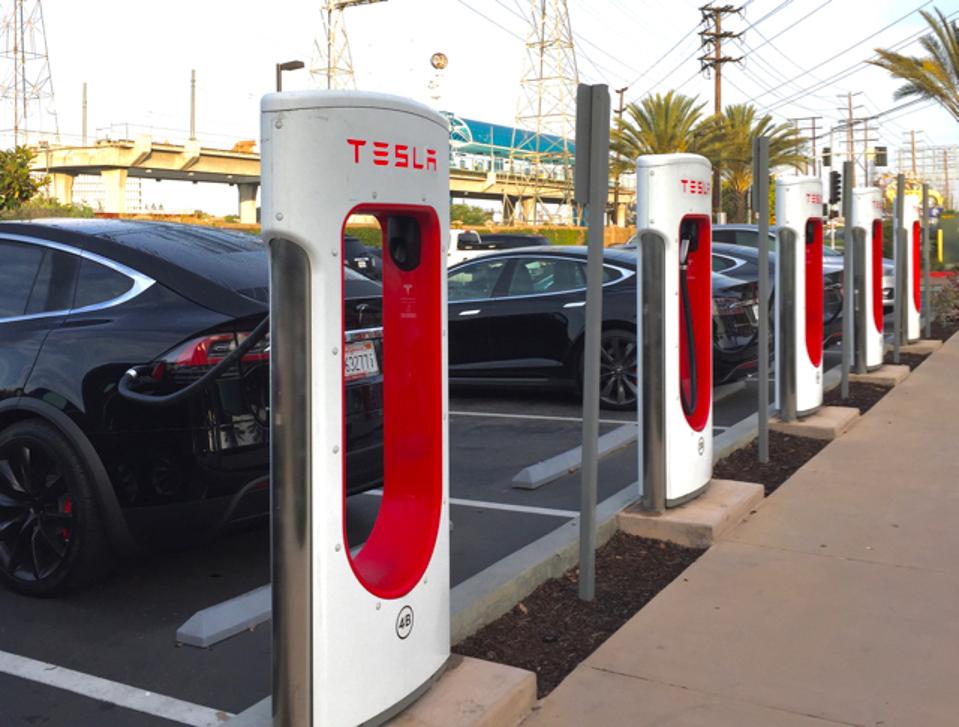 After 30 minutes, the battery was 80 percent charged, and my husband got a message on the Tesla app warning that he’d overstayed his welcome and would soon incur “lingering charges” if he didn’t unplug and move along.
So we headed up the coast with 235 miles of battery range, more than enough to get us to Santa Barbara. We learned, however, that LA’s stop-and-go traffic was better for preserving the Model X’s range than cruising along the Pacific Coast Highway at 70 miles per hour. Each time you tap the brakes, energy is captured and delivered back to the battery. At highway speeds, battery power is going in only one direction.
We were starving when we arrived in Santa Barbara, but we knew that if we wanted to get back to LA that night, we would need to juice up the car again. So the first order of business, before lunch, was finding a charging station.
All we needed to do was touch the lightning bolt icon on the touchscreen to see a list and map of all the nearby charging stations. Details about each station were provided, including the maximum voltage offered, whether it’s on private property or open to the public, and directions to find it.
I was surprised to learn there is no Supercharger in Santa Barbara; a Tesla spokesman explained that the strategy is to put Superchargers along highways between major cities not in them. Tesla’s website says a Santa Barbara Supercharger is coming soon. And earlier this week, the company announced it will double the size of its global charging network to prepare for the launch later this year of its first widely affordable electric car, the Model 3.
Luckily, there were plenty of other so-called destination chargers available, typically at nearby hotels, but most of them were reserved for guests. We did find one publicly available charger behind a beachfront Best Western hotel, so that’s where we headed. The electrons flowed more slowly than at a Supercharger, but it was fine because we planned to spend the afternoon exploring Santa Barbara. The app kept us apprised of how much range we were adding as the time passed. 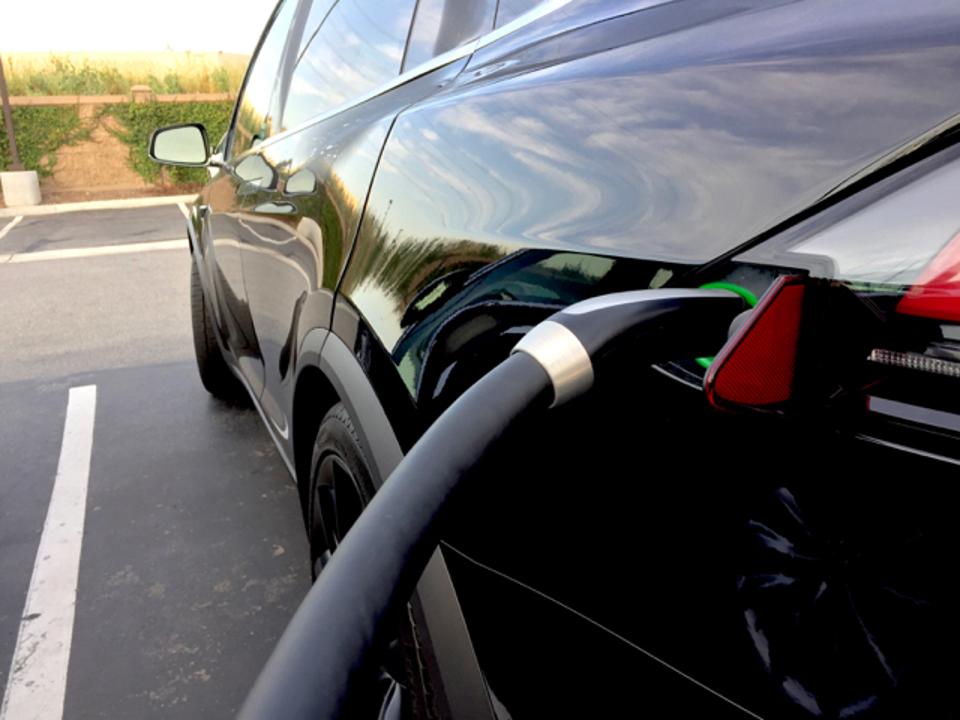 Charging the Model X was less of an issue than I anticipated.

By the time we were ready to head back down to LA, we had recharged to about 170 miles, but we were still a little nervous about the remaining range, so we plotted our journey to include a stop at a Supercharger station in Oxnard, a place I’m sure we wouldn’t have otherwise stopped unless we wanted to buy fresh strawberries.
There were 10 Superchargers located in a far corner of the parking lot of a major shopping center. Just our luck: we picked one that didn’t seem to work properly. While we were dining at a restaurant across the parking lot, we got three text messages that the car wasn’t charging. After making two trips back to the car to reconnect the plug, we finally moved the car to another plug and everything was fine.
With our bellies full, and our battery, too, we left Oxnard knowing we’d have no trouble getting back to L.A.
All in all, it was a successful trip: our daughter satisfied her curiosity about the California schools on her list, while I found answers to my questions about the Model X. Both the colleges and the car provided pleasant surprises.
If only they weren’t so expensive.
Source: Forbes