Model 3 final production-ready version: Teslarati posted a photo (taken on Thursday) of a blue Model 3 near Tesla’s headquarters in Palo Alto. As well as others including one of the interior. Here’s what Teslarati said:

[The] photos showing a close-up look at what’s presumably the final version of the Model 3 dashboard. As noted by Chief Elon Musk earlier this month, the dashboard doesn’t have a heads up display – much to the disappointment of HUD hopefuls worldwide. Noticeably present is the large landscape mounted center infotainment system which will also act as the main command center to the vehicle…Tesla Model 3 drivers will not have an instrument cluster with speedometer. After all, Elon Musk says “you won’t care”…A large digital readout resembling that of an oversized analog speedometer appears on the left side of the infotainment system and occupies nearly a third of the overall screen size. 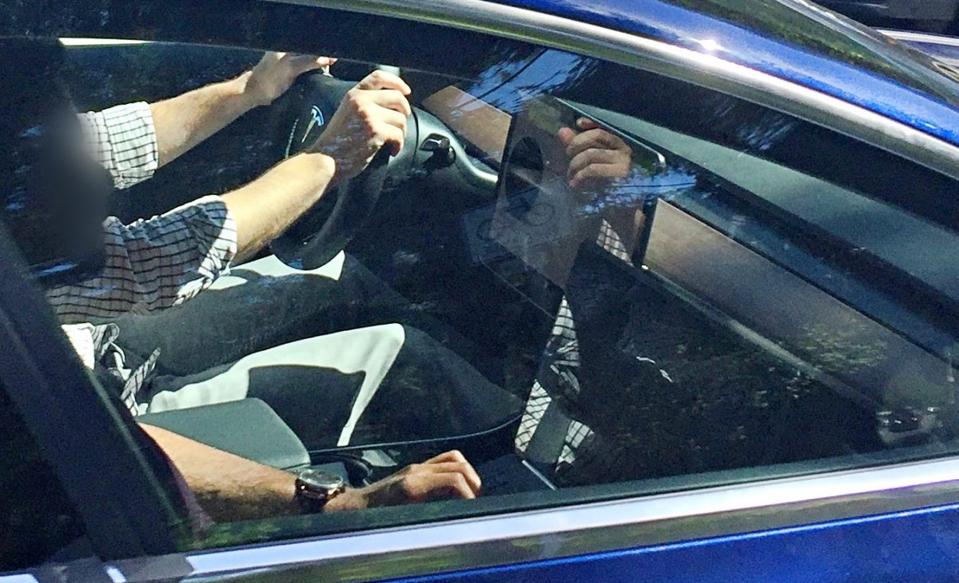 Tesla Model 3 interior and center screen posted this week by Teslarati. Apparently, not much has changed since I took a video during my test ride last year.

With only a few months to go before production, don’t expect any radical tweaks from here on out. And don’t forget that Musk indicated earlier this month, via Twitter, that the Model 3 final unveil will be in July. The first Model 3 to emerge will be a rear wheel drive model. Others will follow in 2018 including the dual motor variant and performance versions, as pointed out by Teslarati.

Ascendance of the robots — Model 3 production variants: And if there was any doubt about production, photos of the fresh arrival of lots of Kuka robots slated (reportedly) for Model 3 production should lend credence to Tesla’s statement about Model 3 initial production targets (what happens in 2018 is anyone’s guess).

Our Model 3 program is on track to start limited vehicle production in July and to steadily ramp production to exceed 5,000 vehicles per week at some point in the fourth quarter and 10,000 vehicles per week at some point in 2018. To support accelerating vehicle deliveries and maintain our industry-leading customer satisfaction, we are expanding our retail, Supercharger, and service functions.  –Tesla Fourth Quarter & Full Year 2016 Update

Semi makes an appearance: a journalist with Recode posted a teaser from Musk when speaking at a TED talk.

The Tesla semi truck will be “seriously next level,” according to recent comments from Musk. And he talked about it last year (July 2016 Master Plan, Part Deux). “There are two…types…needed: heavy-duty trucks and high passenger-density urban transport…We believe the Tesla Semi will deliver a substantial reduction in the cost of cargo transport, while increasing safety and making it really fun to operate.”

More Superchargers coming: total of 10,000/15,000: In a blog post on Monday (4/24), Tesla said: “In 2017, we’ll be doubling the Tesla charging network, expanding existing sites so drivers never wait to charge, and broadening our charging locations within city centers.”

We started 2017 with over 5,000 Superchargers globally and by the end of this year, Tesla will double that number to total more than 10,000 Superchargers and 15,000 Destination Charging connectors [hotels, shopping malls etc.] around the world. In North America, we’ll increase the number of Superchargers by 150 percent, and in California alone we’ll add more than 1,000 Superchargers. We’re moving full speed on site selection and many sites will soon enter construction to open in advance of the summer travel season.  –Tesla blog

“The Tesla Model S 60D owned by Consumer Reports received its automatic emergency braking software update Thursday, but the feature only operates up to 28 mph, according to the digital owner’s manual that was updated at the same time,” CR said. “That’s far lower than the 90 mph limit for Tesla models outfitted with an AEB system included on models built before Oct. 19, 2016. Tesla told CR on Friday that the lower limit reflects its rollout plan for the new software, and the automaker says higher limits will come later.”