While vehicle sales in January and February are always problematic due to the timing of Spring Festival in China, a number of additional cross currents were at work this year. For starters, a 13.9% increase in unit sales last year promised to be a hard act to follow in 2017. Secondly, there was concern that strong sales in November and December in advance of a sales tax increases on sub 1.6-liter cars had, in fact, borrowed sales from 2017’s first quarter. 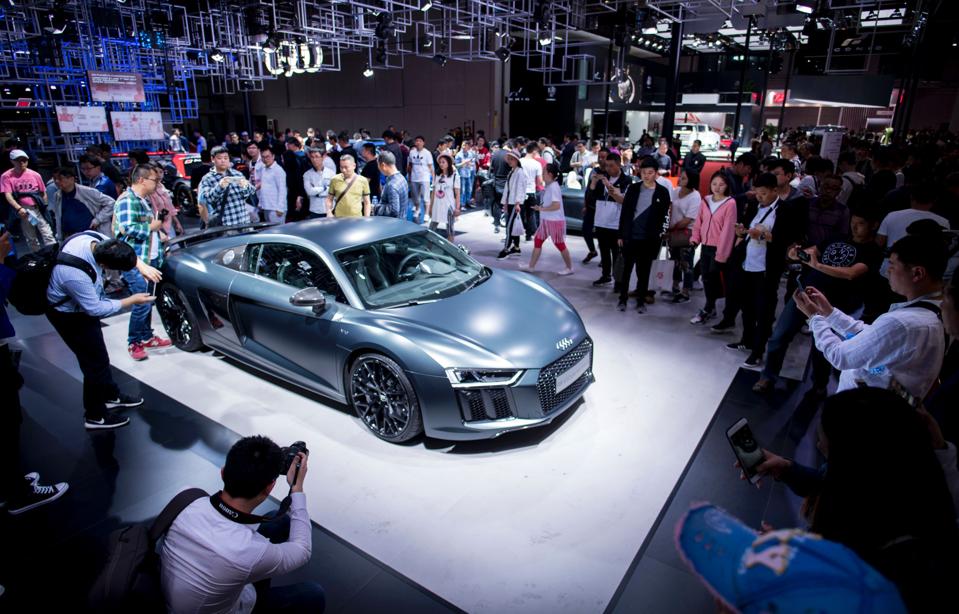 Visitors look at vehicles by German carmaker Audi during the public day of the 17th Shanghai International Automobile Industry Exhibition in Shanghai on April 24, 2017. China’s automotive market remains the most important in the world for manufacturers, with sales jumping 14.9 percent to 24.38 million passenger cars last year, well beyond the 17.55 million bought by US drivers.

Weak passenger car sales in the first two months of this year seemed to confirm the worst fears of analysts. Bernstein, a well-regarded research firm that closely follows auto sales in China, determined that retail demand was down a “very worrying” 19% during January and February. Thankfully, retail demand appears to have stabilized in March. While the passenger car market remains somewhat soft, dealer sales to consumers increased a modest, but welcome, 1% in the month.
In terms of wholesale volume, i.e. sales of vehicles by the manufacturers to dealers: unit sales of trucks, buses and passenger cars in China increased to just over 7 million units during the first quarter, a 7% increase over the comparable period in 2016. Unlike in past years, however, passenger car sales lagged considerably the sales of commercial vehicles. Led by a stunning 93% increase in the sale of heavy trucks, truck sales increased by 30.1% to almost 1 million units during the first quarter of 2017.
While truck sales have soared year to date, bus sales declined by 21.1% through March. In order to combat air pollution in its cities, the Chinese government has heavily promoted the production and sale of electric buses, offering subsidies that often exceed one-half of the price of the bus. As a result, China now leads the world in the sale of all-electric buses, but the lure of such powerful incentives has also had a negative result. In September of last year, China cracked down and penalized five Chinese bus makers for taking about RMB 1 billion ($145 million) in illegal subsidies for new energy vehicles. During the 1Q2017, a review of the practices of all Chinese bus manufacturers by the government has slowed sales, and there is some expectation that electric vehicle subsidies will be cut as much as 20% this year.
In terms of passenger cars, wholesale sales increased by 4.6% to almost 6 million units during 1Q2017. Sales of SUVs once again led the way with an increase of 20.9% in the first three months. SUVs account for 2.4 million, or approximately 40% of total passenger car sales.

While China’s auto market appears to have stabilized in March, the outlook for the rest of the year remains uncertain. Dealer inventories are high, and the combination of high inventories and weak retail demand have led to price declines across all segments of the market.

Meanwhile, the annual auto show in China, which alternates between Beijing and Shanghai, was held from April 21 to April 28 at the National Exhibition and Convention Center in Shanghai. Whether in Beijing or Shanghai, China’s auto show has become one of the largest in the world. The show in Shanghai provided exhibitors with a total exhibition area of 350,000 square meters, and every assembler in the world took the opportunity to unveil its latest models. Auto Shanghai 2015, the last to be held in the city, attracted over 1,185 exhibitors from 18 countries and regions and was covered by 10,000 journalists representing 2,150 domestic and international media organizations.
Auto Shanghai 2017 did not disappoint and featured an interesting mix of gas-guzzling SUVs and new energy vehicles. Sales of SUVs continue to be hot in China, so international and local car companies alike displayed an array of new SUV models. At the same time, China’s auto industry is charging ahead with aggressive plans to electrify the transportation industry, even as policymakers scale back subsidies. China now leads the world in electric vehicles, and every local car company unveiled at least one new electric car concept at the show.