Sadly, in a world where seemingly every customer and every automaker is rushing to SUVs and crossovers, the classic two-door coupe is a fading breed. We’ve had a number of classically beautiful examples introduced in recent years but the reality is none are selling particularly well and most could be on the chopping block in coming model generations. That would be a shame because in a world dull, monochromatic SUVs, we need more cars like the new Infiniti Q60.
I recently got to spend a week with the 2017 Q60, a brand-new coupe that replaced the long-in-the-tooth G37 last year. Armed with the latest Infiniti design language, the Q60 is easily one of the best looking two-door coupes available today, even surpassing the lovely the Mercedes-Benz C300. With its sculpted sheet metal, the Q60 creates areas of light and shadow even when finished in the Majestic White paint of my tester.
Let me just go on a tangent for a moment about car colors. I love black and white photography. Monochromatic images can actually highlight features that get lost in a sea of color. However, I think the automotive world has swung too far in the realm of monochrome. Of the eight available exterior colors on the Q60 all but the bright Indium blue are variations of monochrome hues. This is hardly an issue unique to Infiniti, my wife and I recently encountered this first hand while buying a new Honda. I understand why most dealers only order these shades. They are easier to sell and then resell when cars come off lease. But I beg of automakers, please bring more color back to our roads! Let’s have some personality out there. Rant over.
The Q60 has the classic coupe proportions of a relatively long hood and tight greenhouse. While this is aesthetically superior to today’s plethora of “coupe-like” sedans, there is nothing like the real thing. Of course, the real thing, means all of the same functional compromises that have pushed more people to utility vehicles or coupe-like four-doors.
It’s challenging to get in and out of the back seat and once you are in there, headroom is definitely at a premium under the sloping rear glass. I’m five-feet, ten-inches and the Q60’s surprisingly long 112.2-inch wheelbase means i actually had some clearance for my knees when seated behind the driver’s throne set where I like it. However, the roof panel ends before the place where my head goes when seated in back and the glass is already on a trajectory for the trunklid. I didn’t ride in the back while moving, but I can definitely imagine my noggin bouncing off the glass on Michigan roads.
The back seat is best suited to kids that have outgrown boosters but not yet hit their hormone-induced growth spurts. Honestly though, middle-aged and reasonably well-off empty-nesters are probably the main audience for all cars of this type.
With that in mind, it’s important to keep in mind that despite its twin-turbocharged V6, this is not a sports car, at least in anything but the Red Sport 400 models which I’ve yet to try out. This is very much a grand touring machine, something with decent performance that is nonetheless about being seen in and getting somewhere swiftly and comfortably.
Infiniti offers two powerplants in the Q60, a 2.0-liter turbocharged four-cylinder and the aforementioned twin-turbo V6. That latter option is the first time that Nissan has offered such a configuration since 2000. The last car from the company equipped that way was the Nissan 300ZX turbo. Interestingly that car produced the same 300-hp as the engine I drove. The Red Sport 400 boosts that output by another 33%.
Unlike the long-running and highly regarded VQ V6 that has powered countless Nissans and Infinitis for more than 20 years, this is an all-new engine dubbed the VR that debuted in the 2015 Q50 sedan and we will no doubt see much more of it. It’s considerably more compact than the VQ and features variable camshaft timing on both the intake and exhaust as well as integrated exhaust manifold that allow the turbos to be bolted directly to the heads for short runs and better responsiveness. 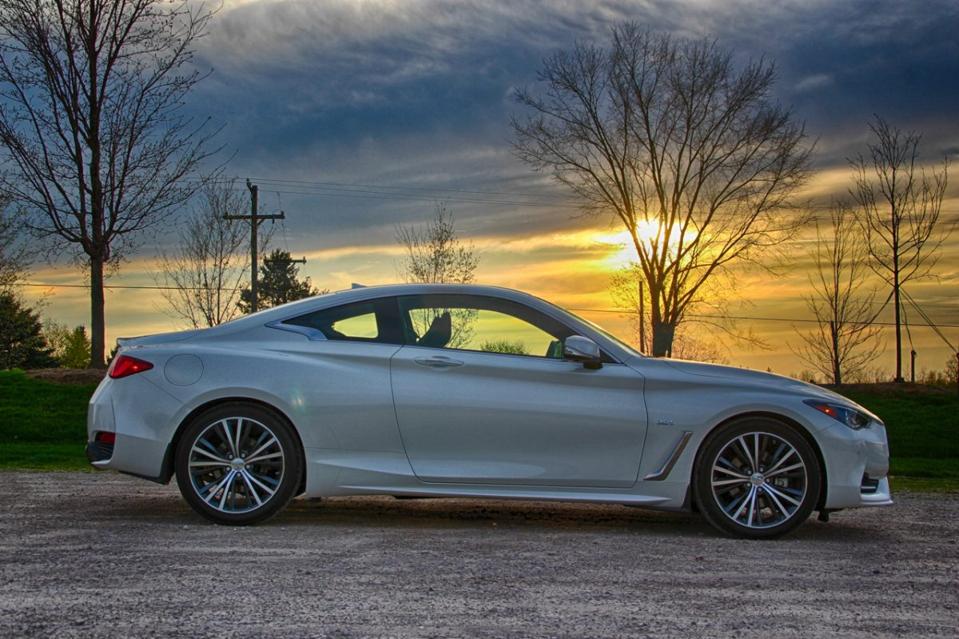 At about 3,900-pounds the all-wheel-drive Q60 I drove is no lightweight, but the 300-hp engine moves it briskly, sending power to the wheels through a seven-speed automatic transmission. In the Premium trim level I tried, you’ll need to tap the shift-lever to initiate manual control of gears. If you prefer steering wheel mounted paddles you’ll have to step up to either the Sport or Red Sport models. Frankly, at the 300-hp level there probably isn’t much to be gained by trying to override the electronics and you should just sit back and enjoy the ride.
This feeling is further amplified by the steering. Like the Q50, the coupe gets a drive-by-wire steering system which lacks a direct mechanical connection between the steering wheel and the wheels at the front corners. On the plus side, this enables the engineers to dynamically adjust the steering response in real time based on speed, lateral acceleration and other parameters. The downside is that you get no actual feedback about what is happening at the wheels, any resistance is purely synthetic like a force feedback wheel for a video game. The weighting is generally fine, but you do occasionally experience some minor quirks in the control. Taken as a GT cruiser, most drivers probably won’t even notice or care, just don’t expect the Q60 to feel like an E36 M3 (if you don’t already know what the means, the Q60 may be for you.
Aside from the back seat, the Q60 is generally a lovely place to spend time with comfortable and supportive front chairs and well executed materials throughout. The only real gripe I have is with the infotainment system which seems to have been a bit of mashup rather than really well thought out. First off, there’s no Android Auto or Apple CarPlay support so you’ll have to just use bluetooth streaming to listen to stuff from your phone. 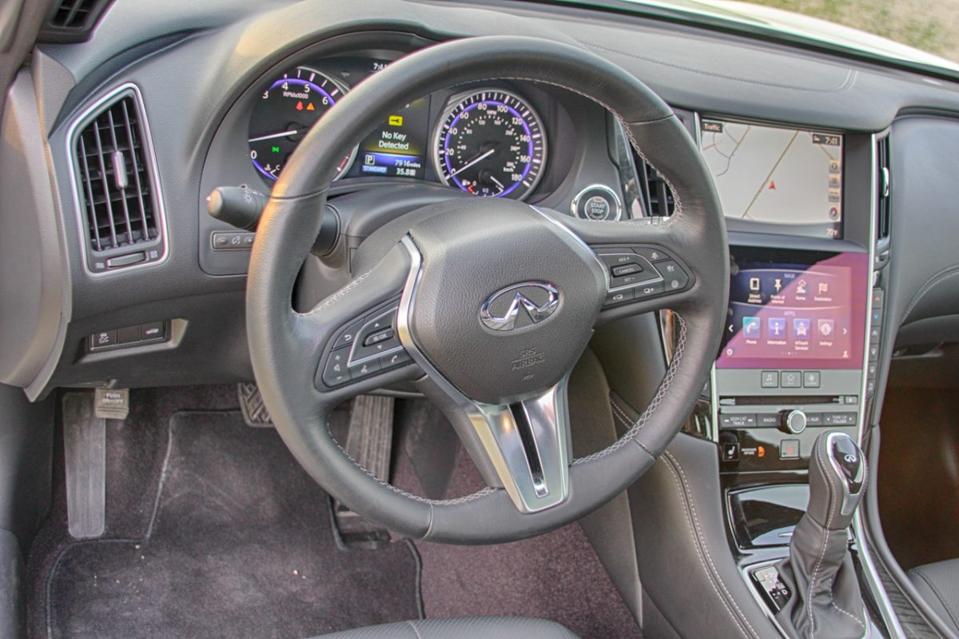 The system features two screens in the center stack, much like many Acuras and the Honda Accord. However, unlike those, both displays are touchscreens albeit with different quality and technology. The display at the top is older looking unit that appears to be a resistive screen lacking multi-touch or swipe gestures.and is mainly for navigation. Just below that is a slightly smaller display with a glossy, glass surface for controlling other functions. This one is more of a fingerprint magnet. The voice control system also appeared to be much more limited in capability than contemporary systems. Overall it seemed like different groups of engineers worked on different parts of this and talk much to each other. The whole thing needs a significant rethink.