The base variant of the Renault Duster has received zero stars for adult occupant protection in the latest Global NCAP crash tests for Indian-made cars. The Duster also received 2 stars for rear child occupant protection. This is the second round of crash testing of cars that are made in India, for 2017. The first round saw the Chevrolet Enjoy and Ford Figo Aspire being crash tested. Global NCAP has been conducting a series of crash tests of popular Indian market models since 2014. India adopts new crash test norms from October this year that will meet the UN testing protocol of 56 kmph frontal offset and side impact crash norms. However, Global NCAP mandates testing at 64 kmph, and most regional NCAP programmes have adopted those norms. India’s current norms are dated and only require a 48 kmph frontal test. The Renault Duster sold in India does not have airbags as standard – which is why it has failed this most recent crash test.

David Ward, Secretary General, Global NCAP, said: “It is troubling that during the UN Road Safety Week we yet again encounter a zero star car in our crash testing in India. Renault produces the Duster in a number of markets and yet it seems content to provide a version for India which falls so far short on safety.” After the results were shared with Renault, the French manufacturer requested Global NCAP to also crash test a mid-variant that has a driver-side airbag fitted on. This second test has yielded the car a 3 star rating which is much better of course. The rear child occupant rating remains 2 stars in this case to of course. But this is where Global NCAP noticed something different about the car. The same model Duster made in Colombia for the Latin American region had previously received a 4 star rating for its driver-side only variant too in the Latin NCAP crash test from September 2015. A quick investigation revealed the reason – the LatAm market Duster gets a bigger sized airbag than the Indian car does. 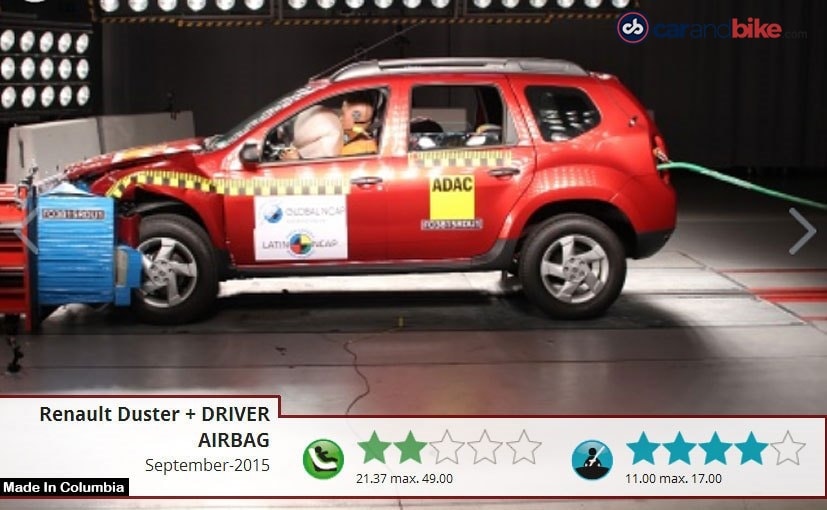 The Renault Duster made in Colombia

The test done in 2015 saw the Made-in-Columbia Duster receive a 4-star safety rating
The smaller airbag sees the driver dummy’s head not striking the centre of the airbag when it inflates – as it should. This causes more potential injuries – some of which a larger airbag would prevent. The Latin American Duster’s airbag (being a larger size) covered the head and chest of the driver. Latin NCAP says, “With the head in maximum forward excursion the airbag still shows containment to the head protecting it from the steering wheel.” This is some cause for worry when it comes to the Indian model. The top end versions of the car have dual airbags as part of standard equipment of course. The Duster has ABS and EBD as standard on 4 of its 5 variants. The airbags only kick in from the RxL (driver-side only) variant. The RxS, RxZ have dual airbags. Renault was last involved in these crash tests with its Kwid last year. That car also received zero stars for its base version, while the driver-side only airbag had also scored low with just 1 star.
In a response to our query, Renault India issued a statement stating, “We are already future-ready in terms of technology, design and engineering for enhanced safety for all our vehicles. Indian Government has announced that the crash test regulation for the existing cars will come into effect in 2019 and for the new cars in 2017. Renault fully supports this.” 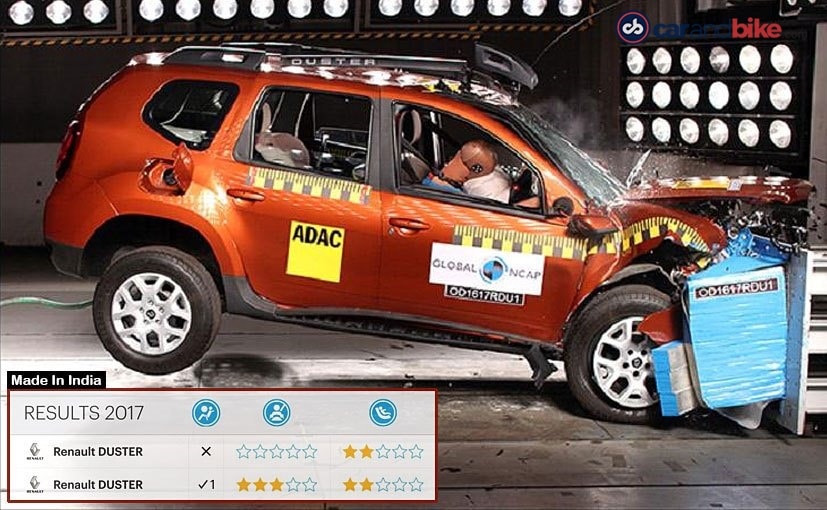 The india made renault duster

Global NCAP has so far crash tested several models from several manufacturers based in India, like Maruti Suzuki, Tata, Ford, Hyundai, Mahindra, Datsun, Renault,Volkswagen and Honda. Results have shown that some cars have had sound structural quality but lack of safety equipment as standard has earned them zero stars anyway. Ever since the first test there has been a huge turnaround in attitudes towards the need for better-built and equipped cars. Consumers are demanding safer cars, and the government has finally issued policy changes that will result in much safer cars coming on our roads. And the industry has stepped up – Mahindra offers safety as at least optional on all variants now. VW, Toyota and Ford have made airbags standard across variants on all models. 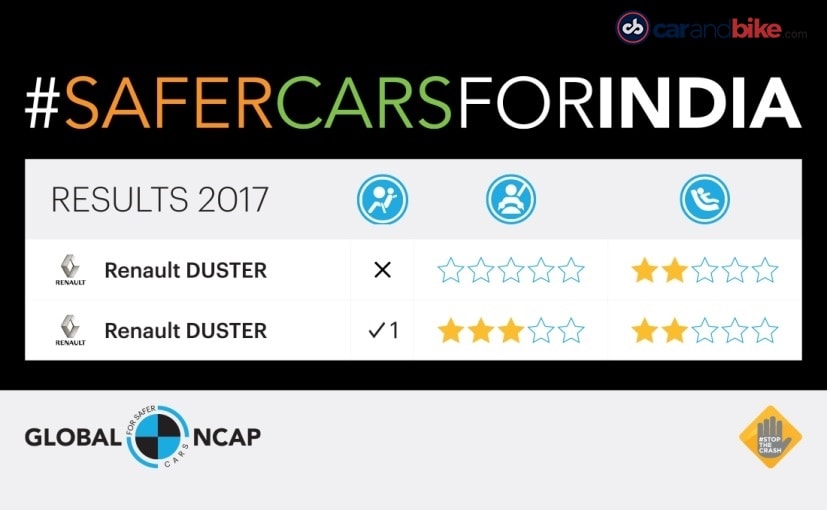 And market leader Maruti Suzuki has made huge changes – investing in its own crash testing facility now 6 of its models now meet the proposed crash test requirements well before the October 2017 deadline. Rohit Baluja, President of the Institute of Road Traffic Education, said, “The maximum speed limit for passenger cars in India has been notified as high as 100kph. Highways in India are witnessing very high speeds of Light Motor Vehicles (LMV) and therefore it is of utmost importance that our new generation cars are built to the highest safety standards. All new models from that date must carry airbags, ABS as standard, and meet crash test norms. All existing models need to transition to the same capability by October 2019.