American luxury car buyers with a penchant for performance are in luck. Virtually all the world’s premium brands are stepping up efforts to meet the demand for hot versions of existing models.

Although marketing costs increase for automakers, the margins on new performance variants can be significant and the showroom halo effect is worthy.
The result is an alphanumeric onslaught from brands looking to polish their performance credentials. So we have Audi S and RS models, BMW M versions, Cadillac’s V editions, Mercedes-Benz’s AMG line, Jaguar and Land Rover SVR variants, Infiniti Red Sport, Lexus’s F models and so on.

For enthusiasts the trend is encouraging, as it wasn’t long ago that the pressure to improve fuel economy threatened to snuff out sportier models.

But automakers have found ways to up the mileage even on more powerful engines. And with the improving economy, the demand from wealthier car buyers for models with more performance and visual distinction has proved irresistible.

Among luxury brands, Audi has been particularly aggressive with the rollout of performance variants in the US. At the New York auto show, Audi announced it is introducing its Audi Sport brand to its US dealer network.

To support Audi Sport, the company will launch eight new R and RS models over the next 24 months. These will include the 2017 R8 V10 Spyder, the all-new 2018 TT RS, the 2018 RS 3 and in 2018 the RS 5 Coupe.
Until this year, only a handful of the RS models sold in Europe were offered to US consumers. But now, says Audi of America president Scott Keogh, the focus is on leveraging the progress Audi has made in its extensive and successful motorsports experience.

“We are excited to offer our customers even more products that benefit from the same developments and technologies first used in motorsport.”

Unlike some brands that launch sporting derivatives, Audi has the motorsports heritage to back up the move, including 13 victories at the world famous Le Mans endurance race, notes Keogh. “You need that credibility to be taken seriously in the market.”
The specs on the forthcoming RS 5 coupe give a taste of the treats in store for performance fans. With an all-new 2.9-liter twin turbo V-6 motor delivering 450-hp, the RS 5 can hit 60 mph from rest in under four seconds.
Even before the arrival of these RS models, Audi has been whetting the appetite of enthusiasts with newcomers such as the latest S4 and S5 models. 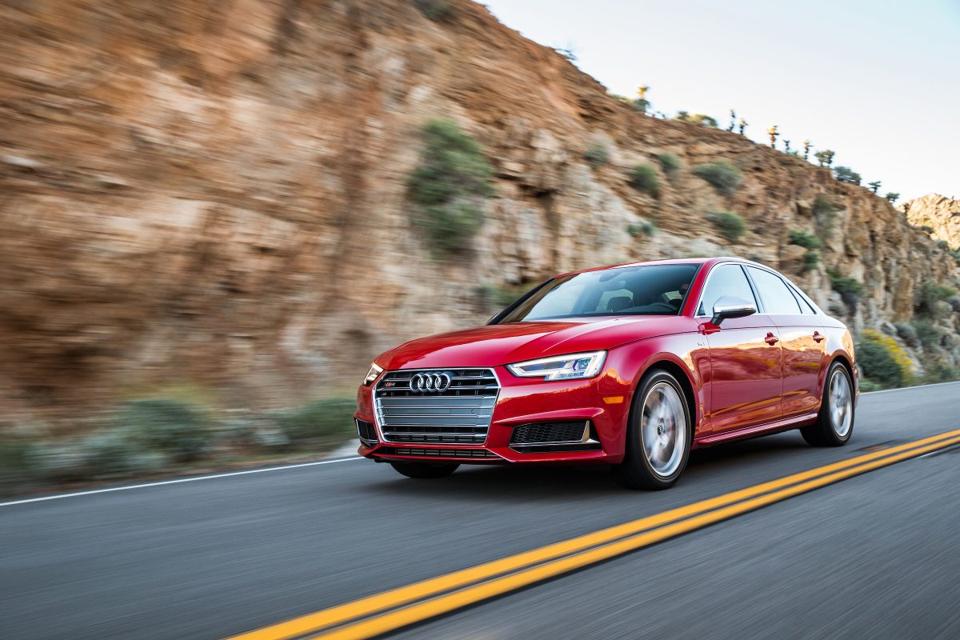 In Audi nomenclature, S models sit between the flagship RS editions and the standard models. In the case of S4/S5 these versions come with significant bodywork and trim upgrades, plus powerful, 354-hp turbocharged V-6 engines capable of turning in an impressive 0-60mph time of 4.4 seconds.

“You’re buying a lot of hardware when you get an S model,” says Anthony Garbis, Audi of America product planner. “For example we have six-piston front brake calipers, which are an expensive option or not available on the BMW and Mercedes competition.”

During our test drive of the S4 sedan and S5 coupe models, we noted the smooth, powerful performance of the new engine, together with taut, confident handling, even on demanding mountain roads. The all-wheel drive quattro chassis has been refined to deliver quicker, more neutral responses to steering inputs and body roll is well muted. These new S models can be driven hard and fast, or in a relaxed, smoother mode. Such a combination of talents is not easy to achieve, but these Audis deliver the goods.
As for design, the S4 accentuates the technical, sharp edged look of the A4 sedan, while the S5 builds on the curvaceous, emotional appeal of its A5/S5 predecessor, itself one of the best looking coupes on the market.
Designer Frank Lamberty took a purist approach to the challenge of reshaping two of Audi’s most successful designs. “The clean profile of the S4 is timeless, but more technical looking than predecessor, while the S5 has lots of fluidity to its profile, like a sand dune. It’s more muscular than old A5/S5,” he says.
Aside from the obvious sedan vs coupe design difference, the S4 and S5 can be distinguished by the design of the bumper and grille, which is wider and lower on the S5.
Audi’s new S4 and S5 are compelling offerings in themselves, but for even more excitement the brand starts launching more RS models this summer. Stay tuned.