“We wanted to take this iconic British off-roader and make it new and modern underneath. Land Rover Defender heritage is what our clients want, but they also want it to perform, on the road and off. We bring it to life, we build on Defender’s charisma,” says Elliot Humble of East Coast Defender. 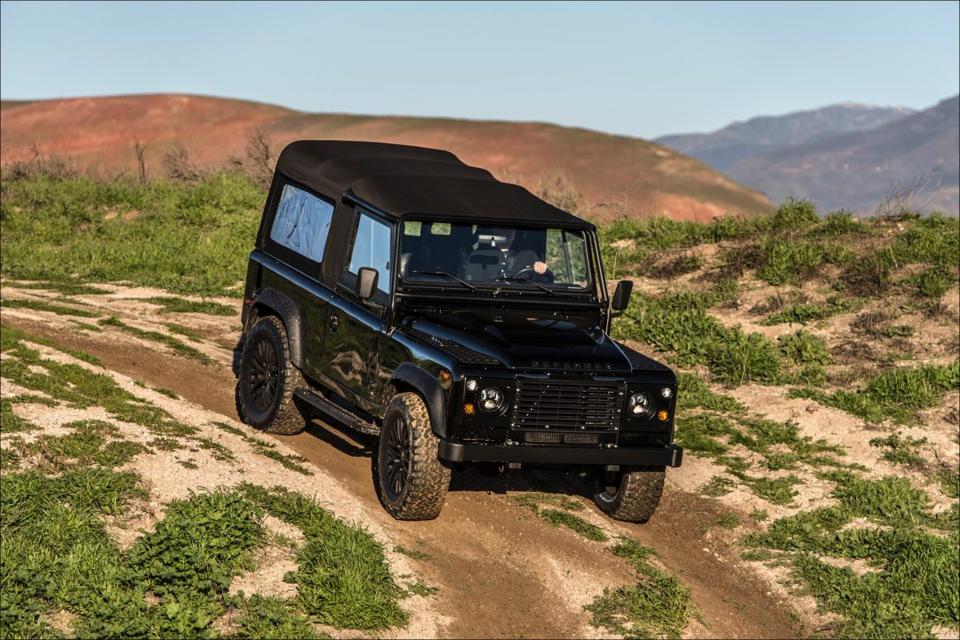 When Elliot and his brother Tom moved from a small town in England to Orlando, Florida, they started buying well-preserved U.S.-market Land Rovers and selling them to eager buyers in the U.K. and Europe, where harsh weather has reduced the Defender population. 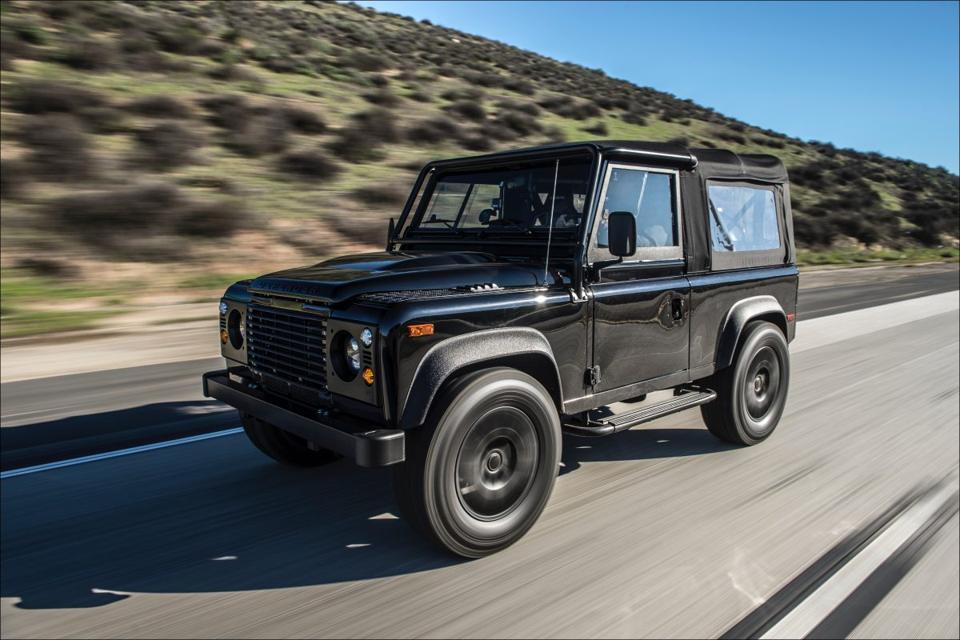 GM horsepower means a Defender can sprint to 60 mph in 6 seconds, 9 seconds quicker than a stock Defender. Ready for duty on the freeways of Los Angeles.

“Early on we recognized that most Defenders restored in the U.S. were half-hearted efforts…ill-conceived, sold on eBay. People would spend 80 grand on a Defender, it would go wrong, and they’d contact us. We didn’t want to get up in the morning for 20 years and turn a quick buck flipping Defenders. We saw a need and asked ourselves, ‘Why don’t we do it properly?’” 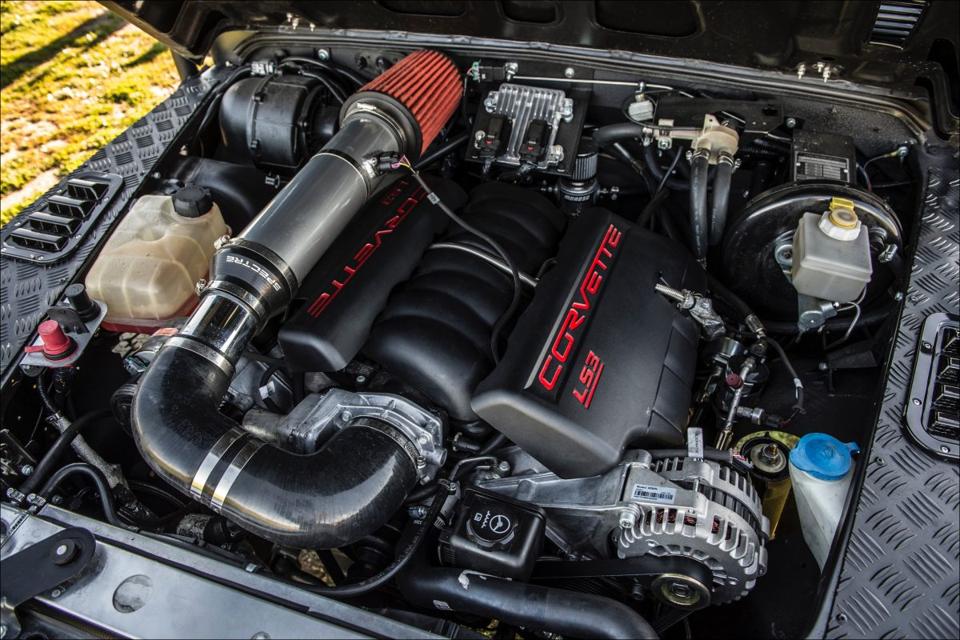 Horsepower and torque of a GM V8 brings Defender to life, delivering on-road performance to rival a Mercedes G-wagen.

That’s when the brothers joined forces with Scott Wallace, who had years of VC experience at Duke Street Capital in London. “We went to fundamentals,” says Wallace. “We recruited Defender veterans from the U.K. to cascade decades of knowledge. We developed an in-house training program that pays employees to earn ASE certification [Automotive Service Excellence, the nation’s most respected training provider for mechanics]. We incentivized employees by offering equity.” 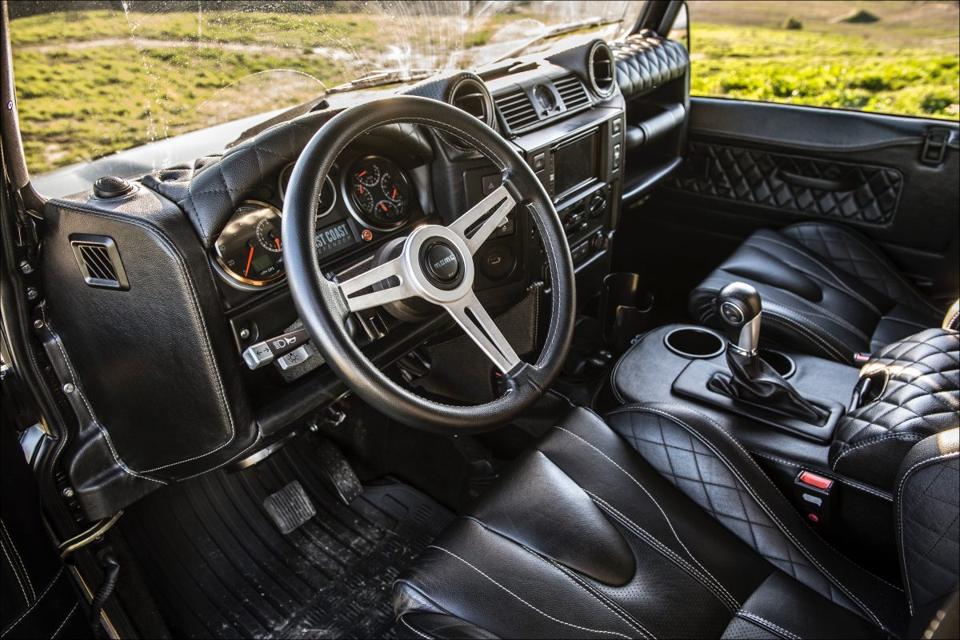 The 1980s dash is updated with infotainment, Bluetooth, and GPS navigation.

“We brought everything in-house,” says Elliot, who studied mechanical engineering for a couple of years at Coventry University before moving to Florida. “We started with a couple of mechanics three years ago. Now we have 25,000 square feet, 32 mechanics and 30 projects a year.” Wallace’s plan elevated East Coast Defender from an ad-hoc custom shop with a used-vehicle brokerage service to a tightly organized firm with a niche assembly process. 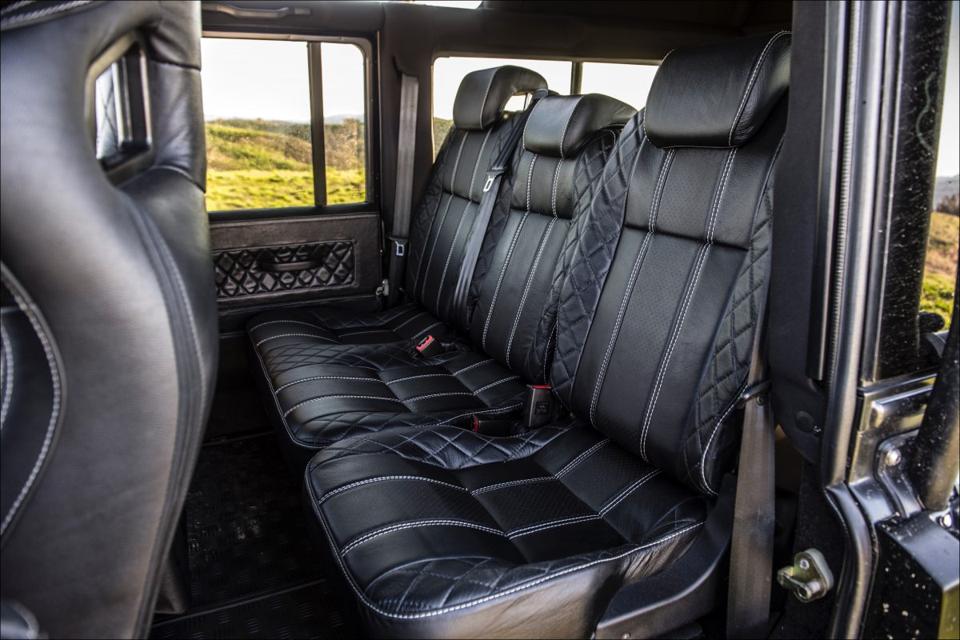 Interiors are built to suit the client’s individual taste and intended use.

“We run a very measured KPI production line,” says Wallace. “We have one guy who quality checks each vehicle as it moves from one bay on the production line to another. At the end the vehicle moves to a quality control bay. There’s a final 3D inspection. We pair the Bluetooth, water-test the body, leak test it. We put it through a robust process. 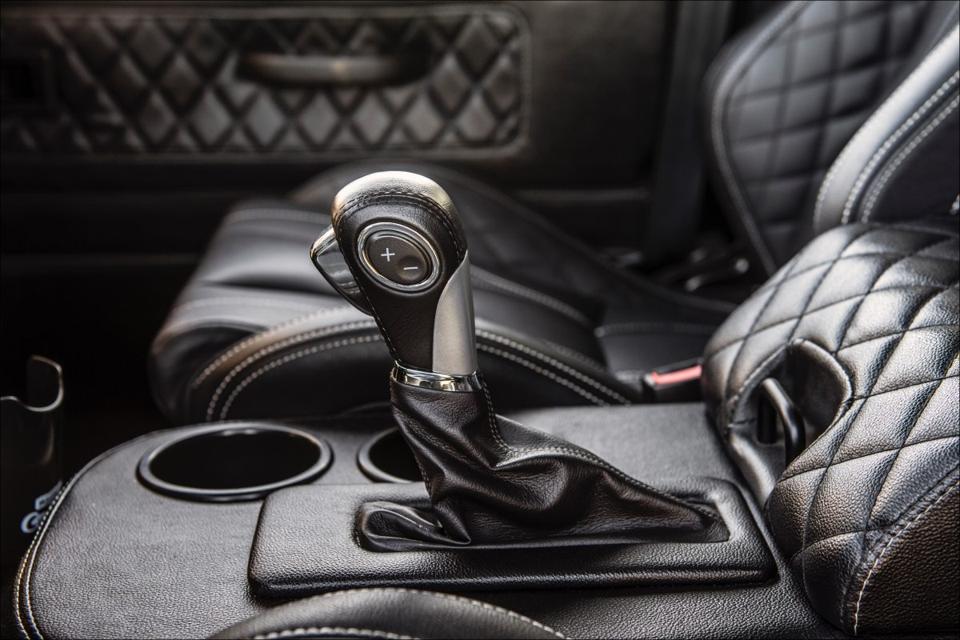 Gearboxes are GM. For serious off-roading, a manual is best for rocking over ruts or walking over a rocky streambed. For suburban and light off-road duty, an automatic is the most civilized choice.

“All employees can stop production if they see a problem. They can say, ‘That truck is not leaving until that problem is resolved.’ It’s costing me $1500 an hour to run the line, but if they want to stop the line, they can,” says Wallace. 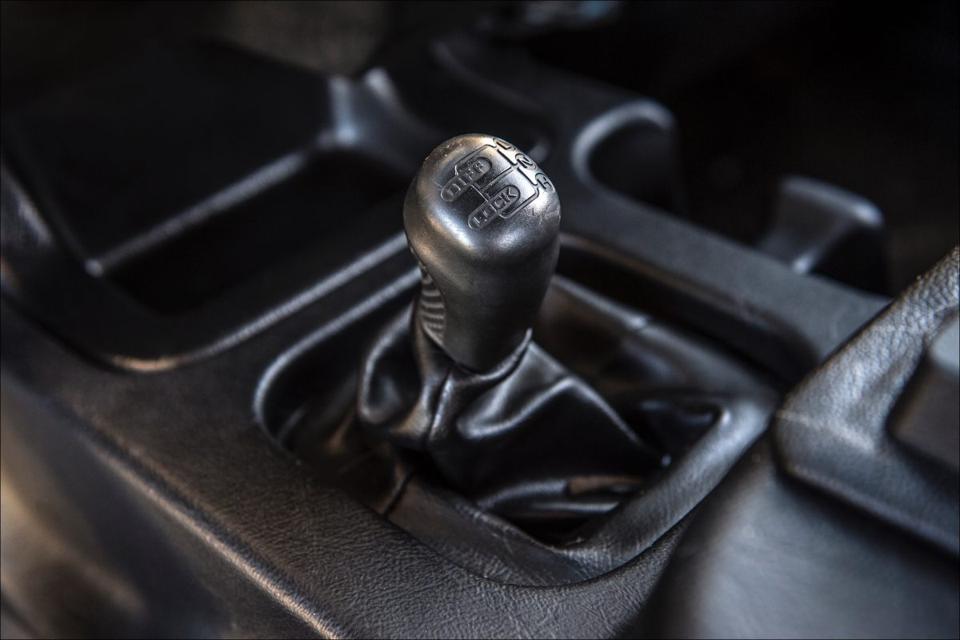 Land Rover’s 4-wheel drive is retained. Off-road with the front wheels engaged, it excels. East Coast Defender is developing a part-time system comparable to those offered by mainstream manufacturers that while enhance performance in suburbia.

In stock form a Defender is too primitive and under-powered to compete with the likes of a Mercedes G-wagen, a high-end SUV with military heritage and Daimler engineering and build quality. “Defender has a very different purpose in the U.K.,” says Elliot. “It’s used on estates and farms. They were military vehicles.” Here in Los Angeles I know an architect, currently toast of the town, who once drove his Defender diesel from California to South America. Defenders are tough vehicles that can conquer almost any terrain. But American luxury SUV buyers want Defender’s aura and go-anywhere reputation distilled for life on a weekend ranch or the missions of suburbia.

“When we were buying Defenders out of California to ship back to the U.K.,” says Elliot, “we concluded that no matter how we rebuilt Land Rover Diesels, they were still not reliable for a daily driver.” A stock Defender can conquer the world so long as it’s regularly serviced and fiddled with, on par with many vintage cars and trucks.

“We offer the 330, 430, and 550-horsepower GM V8s,” says Tom. Opt for either of the two most powerful versions and an East Coast Defender is receiving an Escalade heart transplant, the resulting vehicle rivaling the performance of a Mercedes-AMG G-wagen. Any GM dealer can service the engine and gearbox, and a friendly dealer principle will probably be amused to care for all the vehicle’s needs. They offer a 2-year/50,000-mile powertrain warranty, and like the other builders in this specialized niche, they have a fanatical commitment to keeping these vehicles on the go. Assume that they will spend the time on the phone to talk your local mechanic through an issue.

Because the quality of the powertrain installation and significant body upgrades is recognized now in a market filled with hashed-together eBay Defenders, the trio has launched a related business, East Coast Overhaul, which can add elements of the full build process to a client’s existing Defender. 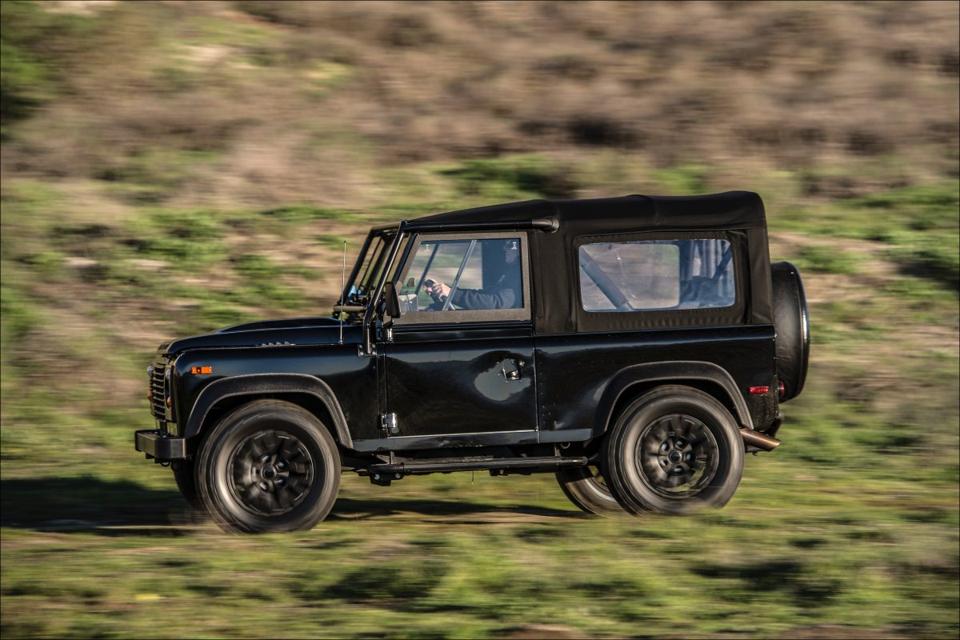 East Coast Defender is based in Orlando, Florida.

“Original Defenders did zero to sixty in 15 seconds and that makes merging on the highway a dodgy proposition,” says Tom. With GM V8 and gearbox connected to the Land Rover 4-wheel drive system, an East Coast Defender cuts that time by nine seconds—six seconds to sixty. For comparison, a standard G-wagen hits 60 in 5.8 seconds. The top-level AMG G65 does the deed in 5.2 seconds. Freeway onramps in LA are not a daunting prospect for an East Coast Defender. 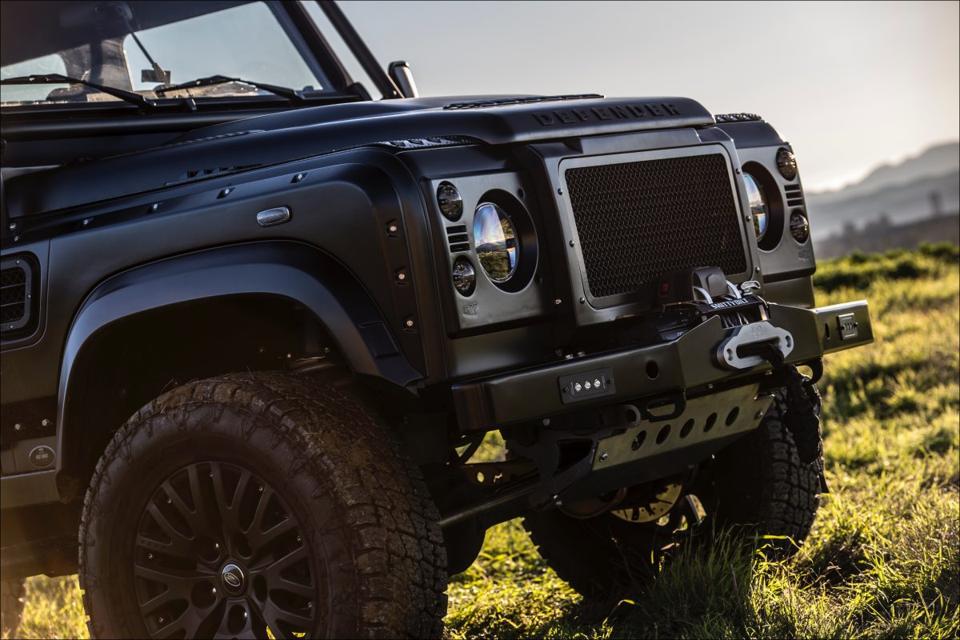 Defender is spiritual descendant of the original Land Rover, built for military, agricultural, and adventuring applications.

Unlike a G-wagen or Escalade bought same-day out of nearby dealer stock, an East Coast Defender is commissioned, with up to a 12-month wait-time. “We have a robust production line, but have never lost creativeness. During the life of the build a client can get involved and amend it,” says Tom. You buy a story to tell in the elevator, card room, or out on the fairway.

“We walk a client through some of our past projects,” says Tom. “We take aspects they like and tie them to planned use of the vehicle. We nail down a preliminary build spec, but it’s always a fluid process. We have an online portal where the client has access to their build record,” says Tom. “We have a full-time concierge at the shop who updates clients every couple of weeks. And Elliot puts questions to the clients like ‘Hey, we’re going to put on your front bumper in four weeks and you have five options—which one do you like?’ That involvement is part of what makes your vehicle special.” 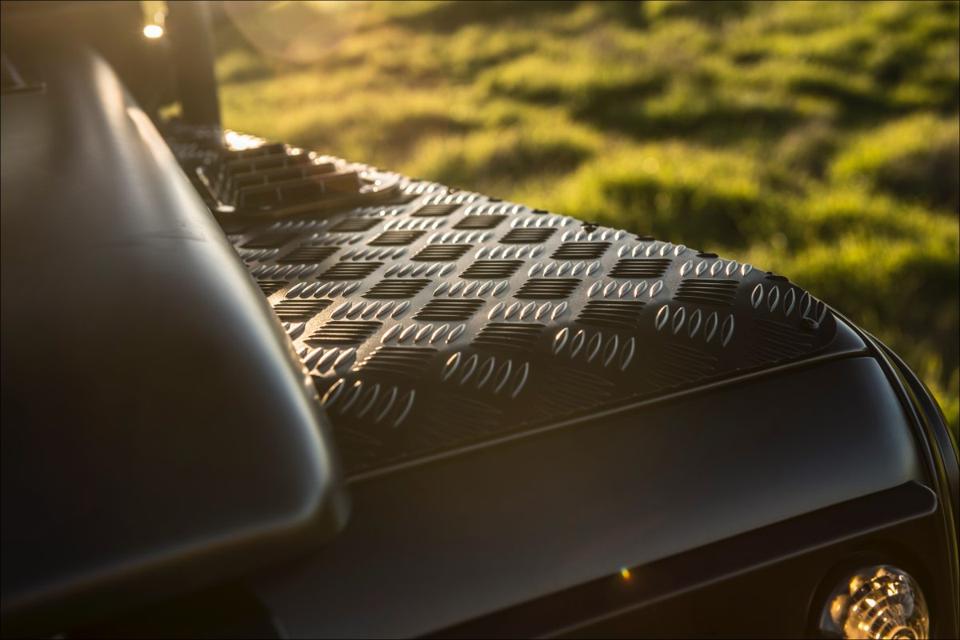 Grips on fendertops can help when setting up winches in the field.

Among East Coast Defender’s clients is Kevin Plank, CEO of Under Armour, who commissioned a 9-passenger Defender for service on dirt roads and open terrain. The resulting vehicle priced at $225,000. “Entry price is about $165,000 and the most expensive to date is about $315,000. We average about 210 grand,” says Elliot. “Our production is entirely for North America. Big markets are California, New York, Texas, and Georgia.”

“Potential clients come in and say, ‘It’s between you guys and a G-wagen.’ If a client really thinks we’re building a G-wagen competitor, we’re not your guys, not your product. A G-wagen you can pick off the lot today and drive it home. East Coast Defender isn’t just a car at the end of it. It’s a journey you take, to build it with us.” 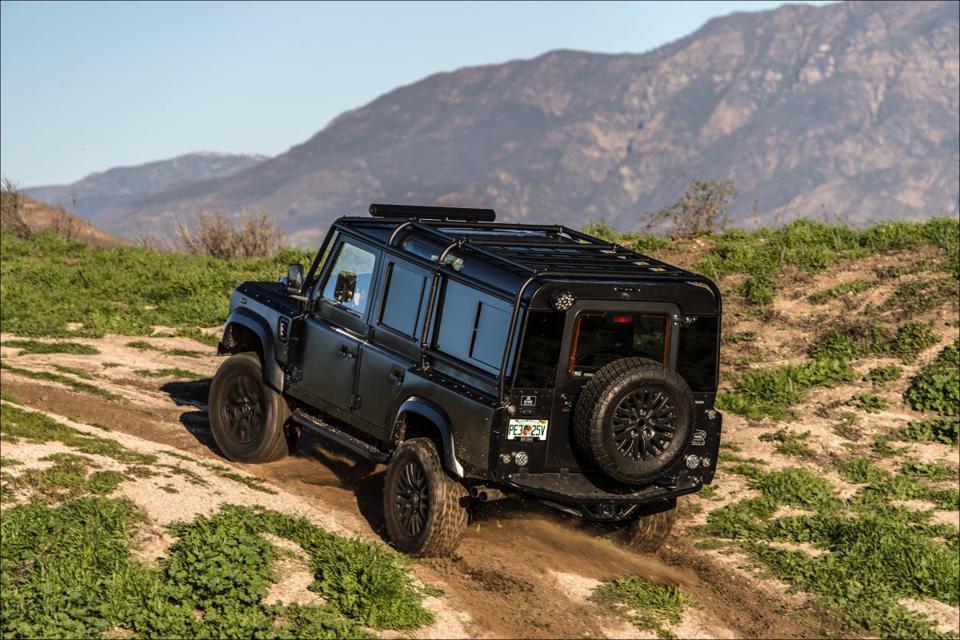