Investors have been climbing aboard the Tesla  bandwagon in droves recently. As a result, the stock has risen above the $300 mark and remained there for most of April and May.
Indeed, demand for Tesla’s Model S sedan and Model X crossover remains quite strong. Meanwhile, there seems to be a massive amount of pent-up demand for the more affordable Model 3, which is scheduled to enter production this summer. However, to achieve its full potential, Tesla will need to navigate around three significant risks in the years ahead.

One potential issue is sticker shock among would-be Model 3 buyers. Tesla has taken hundreds of thousands of Model 3 reservations — most of which came in the first month or two after the car was unveiled. However, it hasn’t released anything beyond the vaguest details on pricing. Tesla CEO Elon Musk has said the car’s starting price will be $35,000. The $7,500 federal tax credit that’s currently available would bring the price down to $27,500. State tax credits in some jurisdictions could make the Model 3 even more affordable.
However, once customers start adding on options, the price could escalate quickly. That’s how the Model S ended up having an average selling price of nearly $100,000 after initially being pitched as a car that would cost about half as much as the $89,000 Tesla Roadster.
Since one of the key selling points of the Model 3 is that it’s affordable, it’s not clear how many reservation holders understand how high the price could go for the options they want. Some are apparently willing to pay $50,000 or more, but there hasn’t been a scientific study to produce reliable data on this point.
A second, related issue is that the U.S. federal tax credit will phase out for Tesla in the next couple of years. But the exact timing isn’t known. Model 3 reservation holders also don’t know when they will receive their vehicles. Some could end up canceling if they learn they won’t be eligible for the federal tax credit (or will be eligible for a smaller credit).
Tesla is investing heavily to ramp up production to 500,000 vehicles per year and beyond. Based on the flood of interest in the Model 3 — which has come without any marketing on Tesla’s part — demand certainly seems strong enough to justify that rate. But there is still a risk that many reservation holders (and other would-be buyers) have unrealistically low expectations of what the Model 3 will cost.

Can Tesla ramp up production as planned?

Even if Model 3 demand is just as strong as it seems, Tesla will then face a new challenge: ramping up production smoothly. Tesla’s Model S and Model X were at times hamstrung by parts shortages after hitting the market. 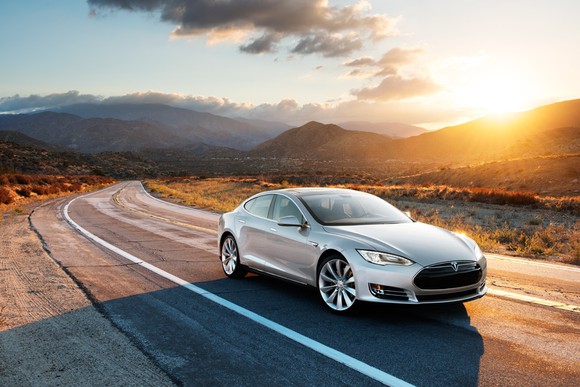 Tesla has dramatically improved its standing with suppliers in the past few years, putting it in better position to manage its planned production growth. That said, going from building 2,000 cars a week to 10,000 cars a week in a little over a year is a huge undertaking. If even one part isn’t available on time, it could snarl production.
Even well-established automakers face parts shortages from time to time, so this risk should not be ignored. And with the Model 3 set to represent the vast majority of Tesla deliveries beginning next year, a production snafu resulting from parts shortages could severely strain Tesla’s finances.

Finally, if supply and demand are both sufficient to support Tesla’s growth plan, the company will then have to keep a vastly enlarged customer base happy to ensure its future success. This situation could prove challenging as Tesla’s customer base expands beyond the “enthusiast” market.
The potential for exponential growth in the Tesla vehicle fleet raises two concerns. First, can Tesla provide adequate service and repair capabilities? Earlier this year, my Foolish colleague Evan Niu wrote about how his Model S had spent nearly eight months in a body shop after a relatively small collision — and still wasn’t fixed at that point.
Tesla and its authorized body shops have traded blame for Evan’s ordeal and similar experiences other Tesla owners have reported. However, customers don’t care whose fault it is: They just want their cars to be fixed quickly. Fortunately for Tesla, most current owners are such big fans of the company that they’re willing to put up with its shortcomings in this area.
Model 3 buyers may not be so forgiving. Tesla has started making some changes to how it handles repairs, but it’s not clear it has addressed the root problem of getting parts to body shops quickly.
Second, can the Supercharger network handle this growth? While Tesla plans to double the size of the Supercharger network this year to address overcrowding in certain areas, the in-service Tesla vehicle fleet may grow twentyfold over the next five years if Tesla meets its ambitious production growth goals. Long waits at Supercharger stations could eventually weigh on customer satisfaction.

Tesla clearly has huge growth potential. Nevertheless, its plan to become a mass-market automaker almost overnight is fraught with risk. During the coming years, investors should keep an eye on how Tesla is addressing the three potential pitfalls we’ve discussed here.

10 stocks we like better than Tesla
When investing geniuses David and Tom Gardner have a stock tip, it can pay to listen. After all, the newsletter they have run for over a decade, Motley Fool Stock Advisor, has tripled the market.*
David and Tom just revealed what they believe are the ten best stocks for investors to buy right now… and Tesla wasn’t one of them! That’s right — they think these 10 stocks are even better buys.