My Teenager Puts Chevrolet's Teen Driver Software To The Test

It’s a sobering fact that vehicle crashes are the leading killer for U.S. teens. According to the Centers for Disease Control and Prevention, more than six die each day — a statistic even more horrifying when you consider that an additional 600 or so teens suffer vehicle-related injuries during that same 24-hour period.

Teen drivers are inexperienced, which means their likelihood of a crash rises significantly when they are distracted, speeding, or driving dangerously. In an attempt to limit some of the unnecessary carnage, nearly all states have adopted graduated driving licenses that restrict privileges for inexperienced drivers. While these laws allow teens to earn more experience during daylight hours, or while alone, challenged enforcement means it is primarily an honor system.
Chevrolet has taken a different and more proactive approach with its Teen Driver software, which is currently offered on 10 new Chevrolet vehicles. These include the Bolt EV, Camaro, Colorado, Cruze, Malibu, Silverado, Equinox, Suburban, Tahoe, and Malibu. The fully integrated system allows parents to view their teen’s driving behavior, limit poor practices, and train good habits — all without having to ride in the vehicle with them. 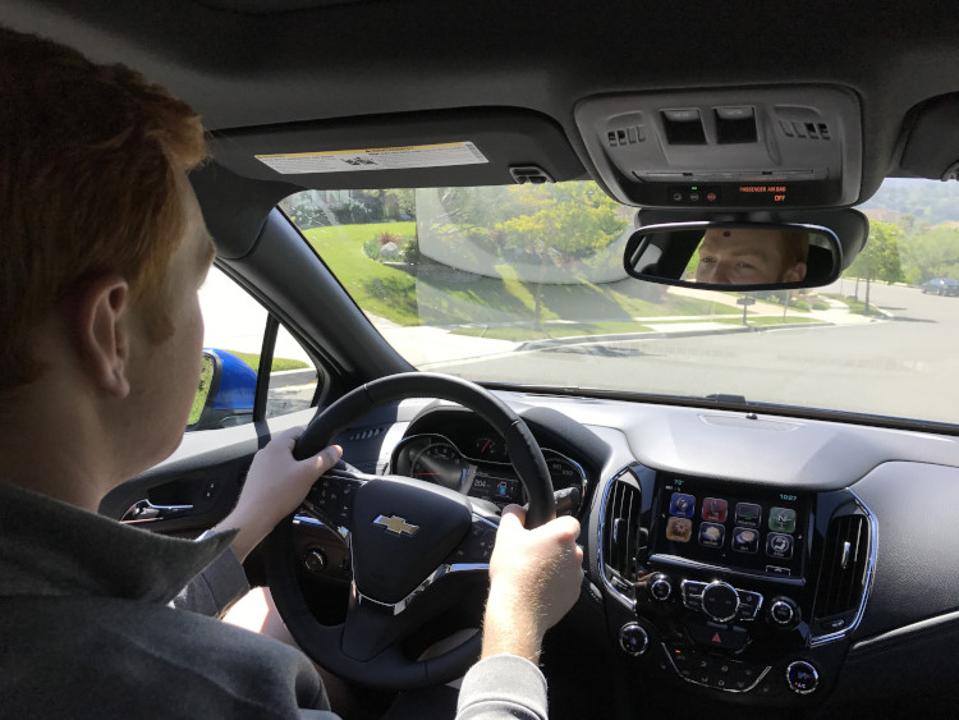 Like many of my peers, I’ve got a teenager driver in my household today — my 18-year-old son, Patrick. He’s been driving for two years in a vehicle without Teen Driver, so I thought it would be interesting to observe his system-generated “report card” at the end of a week and see if the system would have any effect on his driving habits. Good or bad.

Chevrolet lent me a new Cruze RS Hatchback, a vehicle Kelley Blue Book called, “The best compact sedan Chevrolet has ever offered,” in Kinetic Blue Metallic. The front-wheel drive compact starts at about $17,000 and it delivers a combined fuel economy rating of 31 mpg. It’s a popular vehicle for young drivers.

Teen Driver works through Chevrolet MyLink, which is the vehicle’s infotainment software, so it is stand-alone and not tied to OnStar (GM’s subscription-based communications). It takes a few minutes for a parent to initialize the system, which includes setting a numeric four-digit passcode and registering a key, but the execution is straightforward and logical.
Each time the key is used, Teen Driver will initialize and enable/disable specific settings (it won’t work with unregistered keys, so parents may operate the vehicle unrestricted and without data logging). These include muting the audio system until front seat occupants are wearing seat belts, setting a maximum limit for the volume, limiting vehicle speed to 85 mph, delivering an audible speed warning set between 40 and 75 mph, and automatically turning on vehicle safety features (that can’t be shut off by the teen) such as Stability Control, Front/Rear Park Assist, Side Blind Zone Alert, Forward Collision Alert, etc.
The vehicle drives normally (engine output, steering, and braking is unaffected), but Teen Driver keeps a record (aka ‘report card’) of many driving parameters. These include:
■ Distance driven
■ Maximum speed reached
■ Overspeed warning
■ Stability control and traction control events
■ Antilock brake events
■ Forward Collision Alerts (if equipped)
■ Forward Collision Avoidance Braking events (if equipped)
■ Tailgating alerts
■ Wide-open throttle events

When the driver returns home, parents are able to use the vehicle’s MyLink screen to obtain the report card — it can’t be erased, or reset, without the PIN code.
My son drove the Chevrolet Cruze for a full week and the overall experience was uneventful. Teen drivers obviously know that the system is in place so it alters driving habits immediately. “I found myself driving a little bit more cautiously than normal, because I knew I was being monitored and I knew there was a report card being logged,” Patrick pointed out.
A glance at his report card after one 44-mile segment revealed a few items of interest. Most notable were nearly two dozen tailgating alerts, meaning he was following far too closely to the vehicle in front. My son noted the alerts while behind the wheel, and altered his driving style as a result. “There was a warning would come up each time I was tailgating, and it would flash, beep and get angry at me… this actually encouraged me to increase my distance from the car in front from that point forward,” he explained. “After seven or eight of them happened in the first two or three days, you start to become more aware…  you obviously don’t want the beep to continue. I became aware of the distance, and I would then increase the gap between cars and myself.” 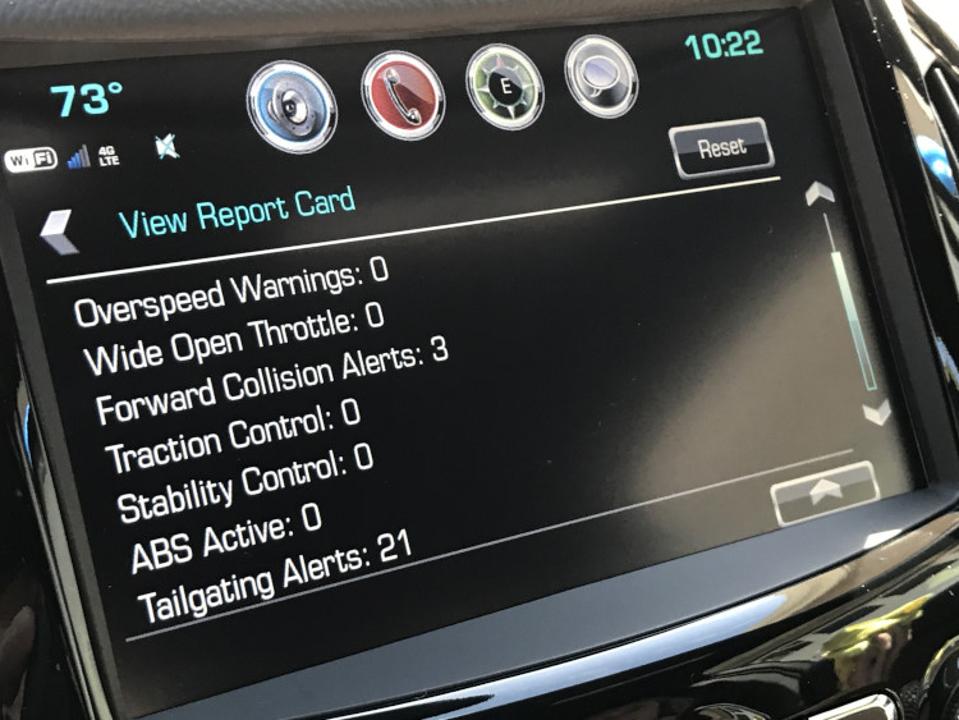 Patrick’s post-drive report card also indicated a maximum speed of 71.9 mph (while it is technically speeding, I’d argue that it’s the minimum velocity to prevent getting run over by fast-moving traffic on L.A. freeways ― I’ll let it slide). Vehicle velocity may be limited to 85 mph with a toggle setting in Teen Driver, but that limit is more of a hindrance to those in rural areas than teens living in urban settings. Patrick never hit the artificial wall. “For my needs, I think 85 mph is completely generous. I never even came close to it.” In fact, he felt the speed limiter should allow a lower setting. “I think 75 mph would be a more realistic ‘wall’ for most teens.”

The seatbelt-audio system lock-out was noticed nearly daily. “The radio won’t turn on until I’m strapped in, and if I have someone in the passenger seat it won’t turn on until they are strapped in, too.” The Teen Driver seatbelt-audio lock did change Patrick’s parking lot habits at high school, which was unplanned. “Normally, I get to school and I unstrap my belt and sit and listen to the radio. With the software, I couldn’t listen to the radio unbuckled, so I had to stay buckled-in while I sat in the parking lot,” he lamented. 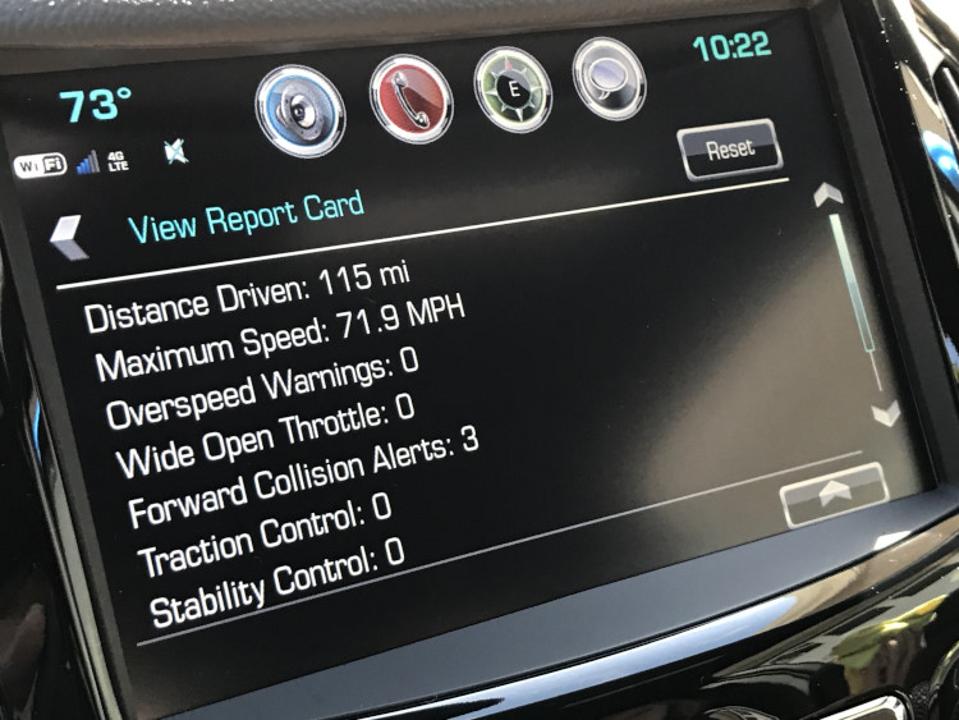 Patrick was continuously aware of the software, but it never felt intrusive, overbearing, or like it was an annoyance ― teen drivers don’t need another thing to worry about while driving. Instead, my son said that he liked the way Teen Driver worked. “I think it’s a good system in the way it’s executed. It allows teens to drive, but then their parents can later critique the report card. In my case, it made me think about my bad habits, such as following too closely, and I learned how to keep it from reporting activity.”
Changing poor teen driver habits, whether tailgating, driving aggressively, or even operating a vehicle without wearing a seat belt, is the key ingredient in Chevrolet’s Teen Driving software. And, it appears to be very effective. “By the end of the week, my report card was perfectly clean because I was increasing my following distance and watching my speed. I was much more aware of the way I drive, and it improved some of my bad habits,” said Patrick.
That kind of driving behavior saves lives, especially when those drivers are inexperienced. But, like any teen-monitoring system, it’s not going to work without the nod of approval from all involved. Patrick learned how to coexist with it ― never considering it restrictive. He never asked me to shut it off or remove the alerts, and by the end of the week began to appreciate it.
In fact, as we retuned the Cruze hatchback to Chevrolet, I asked my teenage son if he felt that Teen Driver was effective and made him safer. He looked at me with a reassuring smile and said, “Absolutely.” 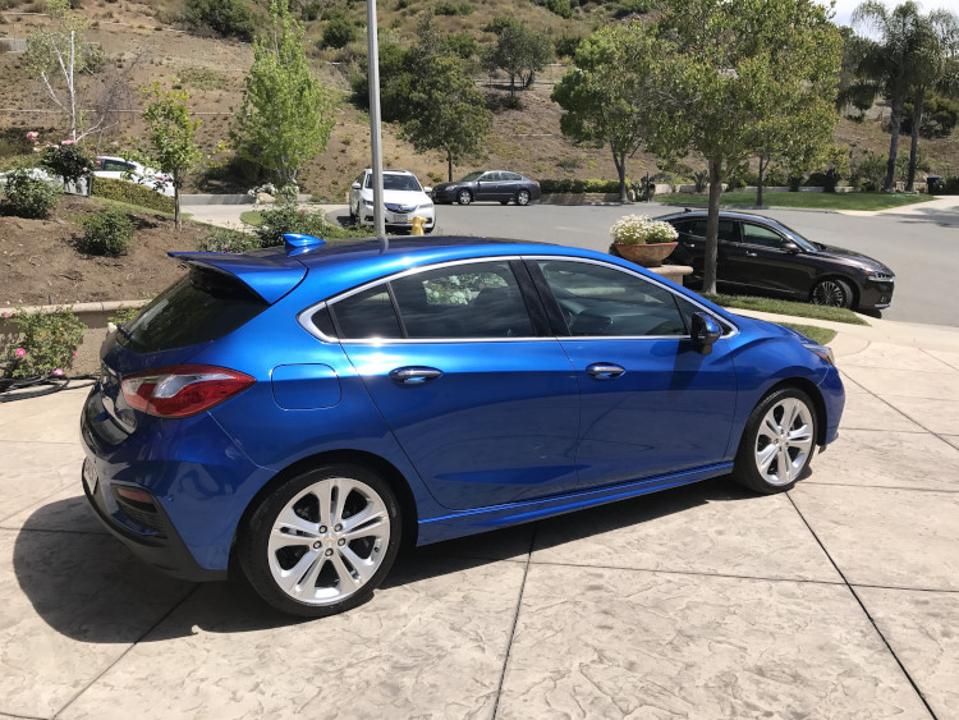