The wait for the Civic Type R is almost over, and now we know how much it will cost when it arrives at dealers. A member of the CivicX.com forum found a lot full of new Type Rs near a port. According to his post, he saw someone attaching window stickers. Window stickers of course show prices, so he went over and snapped a picture of a stock one without options. As you can see below, the car will start at $34,775. The sticker also says the model shown is a Touring trim, which suggests there may be a better-equipped model above it. You can see the photo at CivicX.com along with photos of the cars waiting to be delivered. 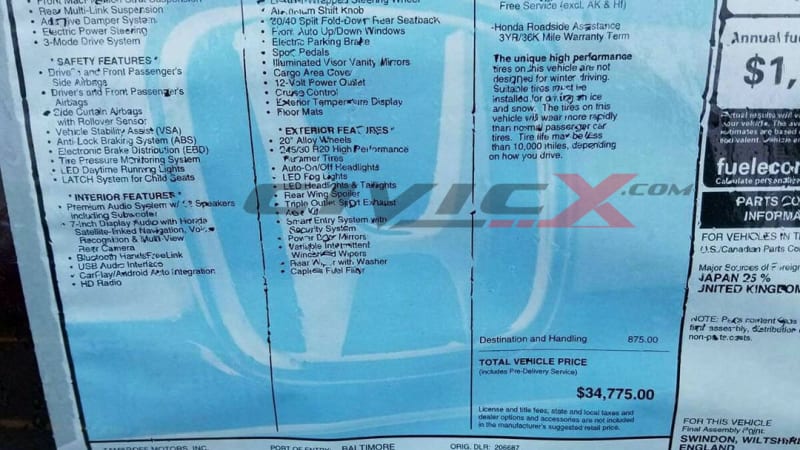 This price makes the Type R the cheapest of the hardcore hot hatches. It’s over $2,000 less than the Ford Focus RS, and nearly $5,500 less than the Volkswagen Golf R. Whether it’s the better value is still up for debate, though, since both of the Type R’s primary competitors have two more driven wheels, and the Ford makes over 40 more horsepower than the Honda. As far as driven wheels go, though, the Civic Type R does have some bragging rights thanks to taking the Nürburgring record for front-wheel-drive cars.