Since 2010, Chevrolet has been limping the second-generation Equinox along, doing the bare minimum to keep it competitive in the compact crossover segment. But for 2018, Chevy finally gave the Equinox a ground-up redesign, with a lighter body (by 400 lbs) and chassis, and three new turbocharged engines.
A turbocharged 1.5-liter four-cylinder serves as the base engine, and a 1.6-liter turbodiesel that will be available later this summer will be the economy leader. In-between is a 2.0-liter four-cylinder gas engine introduced just recently. It’s this example that we got to try out in Nashville, Tennessee, to find out if the new Equinox is worth your consideration.
This new 2.0-liter unit isn’t as powerful as the 3.6-liter V6 it replaces, making 252 horsepower as opposed to 301. Torque is down, too, with 260 pound-feet instead of 272. But what it loses in power, it gains in fuel economy. The old V6 only managed 17 mpg city and 24 mpg highway with front-wheel drive, and the all-wheel-drive version got 1 mpg less in each category. The new 2.0-liter four-cylinder gets 22 mpg in the city and 29 mpg on the highway with front-wheel drive. Going with all-wheel drive drops the highway number by 1 mpg.
Compared with the rest of the segment, the Equinox’s 2.0-liter engine fares well, more so than the already available 1.5-liter. Only the Ford Escape Titanium with its own 2.0-liter turbocharged four-cylinder with 245 horsepower and 275 pound-feet of torque comes close to the “big-displacement” Equinox. The front-drive version of that Escape also matches the Chevy for fuel economy, but the all-wheel drive version loses out with 20 mpg city and 27 mpg highway. The 2.0-liter Equinox also outguns competitors such as the Mazda CX-5, Toyota RAV4, Honda CR-V, and Nissan Rogue – which all make less than 200 horsepower. That’s not an entirely fair comparison, though, since the $30,090 2.0-liter Equinox costs roughly $6,000 more than any of those less-powerful crossovers. The $24,525 1.5-liter Equinox is a closer competitor, and its 170 horsepower and 200 pound-feet of torque are square in the middle of the pack. 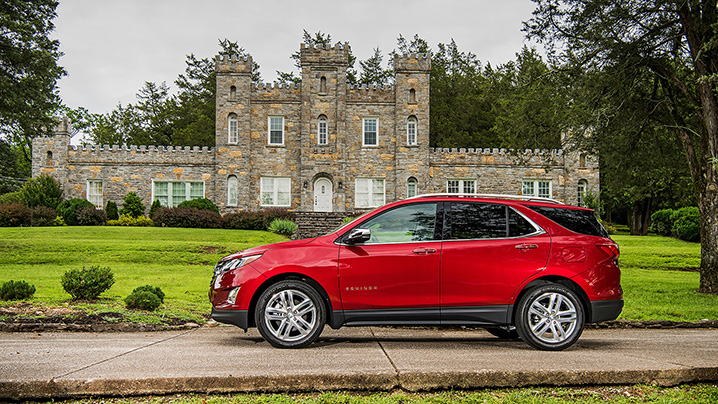 In practice, the 2.0-liter engine feels well-suited for this crossover. It doesn’t turn the Equinox into a tall hot hatch, but you’ll never struggle to pass people or get up to speed on highway ramps. Power delivery is smooth without much turbo lag. The engine is also quiet around town and when cruising on the highway, but at high rpm, it elicits some thrumming noises that permeate the otherwise relatively quiet cabin.
It’s unlikely many drivers will frequently experience high rpm, though, since the 9-speed automatic transmission does everything it can to keep the engine turning slowly. This of course means plenty of upshifts to keep the needle from swinging too far up the tachometer, but every shift is silky smooth and nearly imperceptible.
Where the transmission could use some improvement is in shift speed. It takes a moment for it to wake up and downshift when you demand more giddy-up, and the same goes for upshifts. Putting it in the low mode or manual mode doesn’t speed things up, either.
The impeccably maintained winding roads outside of Nashville also revealed that the Equinox is a fairly agile handler. For a tall crossover, there isn’t much body roll, and the chassis reacts quickly when changing directions and is stable through corners. It was further evident the chassis was more capable than the tires fitted to it, which complained at their earliest convenience in the turns.
The Equinox exhibited significant understeer when applying throttle in the corners, but engaging all-wheel drive (on an Equinox so-equipped) helped mitigate this. The steering isn’t quite as enjoyable as the chassis, though. It’s fairly sensitive and precise everywhere except just off-center, and it weights up well.
Unfortunately, feedback is slim making it more difficult to place the front tires. Tennessee’s smooth back roads, while great for driving, made it tough to evaluate ride quality. But we found a handful of bumps exiting Nashville on which the Equinox exhibited more body movement than we would’ve expected. The suspension also felt fairly firm, but it didn’t kick or buck over bumps. 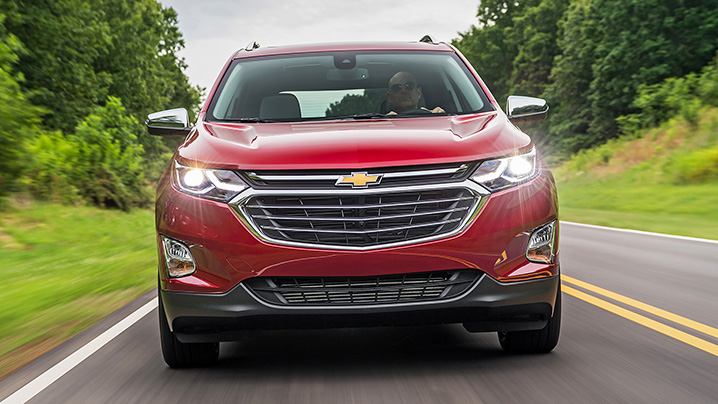 We should pause here for a moment to explain the Equinox’s unusual optional all-wheel-drive system. As mentioned in the discussion of handling, the Equinox’s system is selectable. Most all-wheel drive crossovers use a full-time system in which the front wheels are powered all of the time, and when they slip, some proportion of available power is rerouted automatically through a center coupling to the rear wheels.
The Chevy Equinox’s AWD system only transfers power rearward when the all-wheel drive button is pressed. Otherwise, the Equinox stays in FWD mode and the rear axle is disconnected entirely. If the car suspects all-wheel drive is needed, it will prompt the driver to hit the button.
The reason for this is to eke out every last mpg possible. According to the lead engineer on the Equinox, even when power is primarily going to the front wheels in all-wheel-drive mode, there’s still a bit of drag on the engine from having the rear wheels engaged. By utilizing this system, Chevrolet says it can save up to 1 mpg. It also should be noted that the Equinox can be left in all-wheel drive in all driving conditions without any damage, but it’ll incur a slight mileage penalty.
The cabin is a pleasant if unremarkable place to be. The dashboard and trim in the lower-level Equinox LT we drove was typical GM: austere with little contrast. Except for the occasional bits of chrome, all of the plastic and leatherette trim was black. They were nice to touch and put together well. Higher trim levels, such as the Premier, feature additional contrast stitching on the leatherette trim panels and can be had in additional colors that do wonders for breaking up the acres of black plastic. 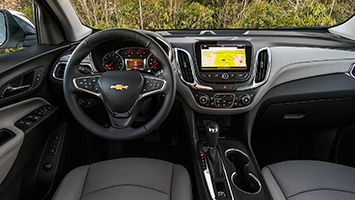 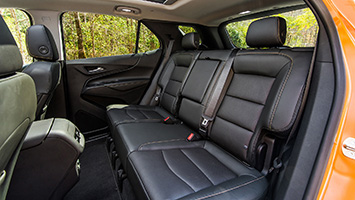 The seats are well-sculpted, providing plenty of lumbar and side support. They place you high enough that you can see out easily, which helps for maneuvering the little crossover confidently. The rear seats are also pleasant, offering plenty of head and leg room. In fact, this 5-foot 11-inch, mildly heavy editor fit in the second row (with the driver’s seat adjusted normally) without issue. They’re less supportive than the nicely bolstered front chairs, though.
While passengers should be plenty comfortable, everyone will want to pack on the light side. At 29.9 cubic feet behind the rear seat and 63.5 cubic feet with the seats folded, the Equinox has significantly less cargo space both behind the second row of seats than Honda CR-V, Ford Escape, Nissan Rogue, and Toyota RAV4. The Rogue also offers additional flexibility in the form of an available, if cramped, third row seat. At least the Equinox has a relatively flat load floor, and a handy storage area below the cargo floor.
The base trim for the 2.0-liter Equinox is the LT, and it comes with some useful standard features including the relatively easy-to-use MyLink infotainment system that is compatible with Apple CarPlay and Android Auto. It also comes standard with a trial for 4G LTE wi-fi and satellite radio. The front seats are heated, and climate control is dual-zone automatic with vents for the rear. Safety features are hit and miss, though.
On the 2.0-liter turbocharged Equinox, you get the full complement of airbags, stability control, and a rear view camera. It also comes with a “Teen Driver” feature, which allows parents to keep an eye on their young drivers’ driving habits and limit how fast the car can go, and how loud the audio can be. 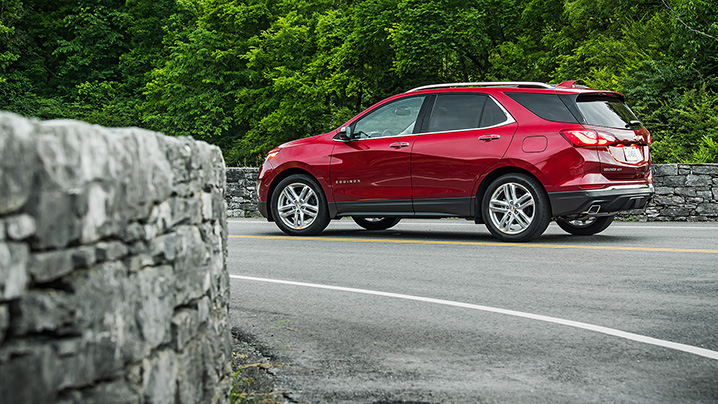 But a number of other useful safety features are optional on the 2.0-liter, and not available at all on lower 1.5-liter trim levels, including automatic emergency braking and collision alert, rear cross traffic alert, and lane departure assist and warning. Automatic emergency braking is standard equipment on all Toyota RAV4s, Mazda CX-5s, Nissan Rogues, as well as all Honda CR-Vs with the turbocharged 1.5-liter engine. The Rogue, 1.5-liter CR-V, and top two CX-5s also feature rear cross traffic alert, while lane departure warning and assist come on every RAV4 and the turbo CR-Vs.
As previously mentioned, the entry-level turbocharged 1.5-liter model starts at $24,525, which just slips below the of all the aforementioned competitors above, while making similar power. Moving up to an Equinox with the 2.0-liter turbocharged engine we tried will require choosing the mid-level LT trim, and it bumps the price up to a spendy $30,090. That’s $55 less than the similarly-powerful base Ford Escape Titanium.
All-in-all, the Equinox is a crossover that finds itself muddling in the middle of the segment. It’s one of the smaller vehicles as far as space is concerned, and it falls short on safety equipment in some trims. Its main advantage is that it’s reasonably nimble, and it packs one of the most potent engines in its class, but you’ll have to pay for that power. So if you’re in need of a high-output crossover, the Equinox is a solid choice. If power isn’t your prime directive, you may want to keep your options open.
Fuente: Auto Blog