I’m traversing Norway’s stunning landscapes but don’t want to take the 2018 Range Rover Velar offroad. It’s not capability I’m worried about (though I’ll admit the road-biased 22-inch hoops and 40-series tires give me pause). Rather, it’s the look of the thing — I mean, have you seen it?
From the gentle sweep of its domed hood to the elegant arc of its roofline (never mind my tester’s sumptuous ivory interior), Range Rover’s first midsize SUV is a stunningly attractive specimen, a five-seat lounge on wheels that makes competitors like the Porsche Macan and BMW X4 look like Automoblox in contrast. Doesn’t help that it’s finished in Flux Silver, a trick satin finish available only on the priciest of Velars, the $89,300 First Edition. Eventually, I answer the call of duty and hit the trail. You know, for science.
Ranger Rover says the new Velar “fills the white space” between the Evoque and the Range Rover Sport. I’m not sure why that space is white, but size-wise the new sport ‘ute comes closer to its larger stablemate, measuring just under 2 inches shorter than the Sport but a full 17 inches longer than the Evoque. Riding on a modified F-Pace chassis that’s been reinforced for offroad duty, Velar is powered by a 247-horsepower, four-cylinder turbo gas engine ($49,900), a 180-hp four-cylinder turbo diesel ($56,200), or a 380-hp supercharged V6 ($64,200).
Unlike other aging Land Rover platforms, there’s a whole lot of newness to Velar’s look and feel (though you’ll find similar versions of its powertrains in other cars, like the supercharged V6 in the F-Type and Discovery). 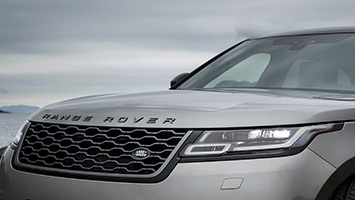 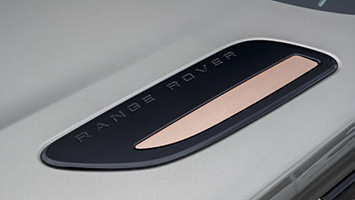 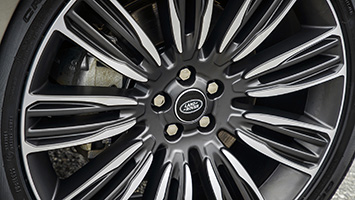 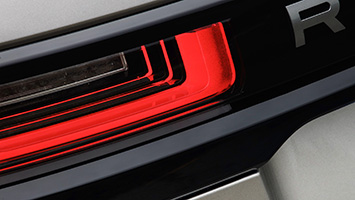 The fresh bits are all over, but the driver and passenger-facing interfaces are particularly innovative, from the new Touch Pro Duo screens (which offer dueling TFT touchscreens for the lion’s share of the car’s controls) to the interior design that, for the time ever, includes a textile offering that’s positioned as a no-cost equivalent to the top-line Windsor leather. The material, a wool blend developed with Danish firm Kvadrat, feels as soft and premium as a high-end suit. Flanked by a faux suede material made from recycled plastic bottles, the leather-free cabin is a surprisingly sexy and novel alternative to traditional cow, one that just might tilt the perspective of luxury car shoppers.
It’s not the first time wool has employed in a high-end interior (Maserati teamed up with Italian menswear house Zegna years ago, juxtaposing the threads with leather). But this treatment is among the more successful experiments with non-traditional materials, and likely to tempt buyers who might otherwise single-mindedly believe that animal skins are the only way to ornament a car interior. 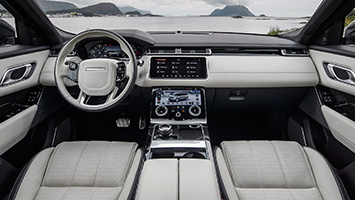 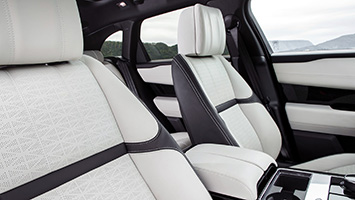 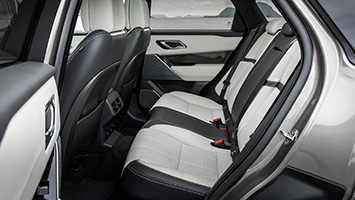 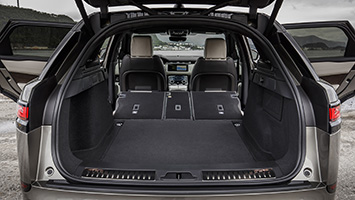 When it’s time to venture away from tarmac, I raise the air suspension (which elevates clearance to 9.9 inches, a 1.8-inch increase over the Normal mode), set the Terrain Response system to ‘Mud and Ruts’, and ease onto a dirt trail that climbs into a mountainside. The first leg isn’t particularly taxing, and the Velar’s electronic aids make it easy to navigate some of the tighter sections. With 332 lb-ft of torque available between 3,500 and 5,000 rpm, it doesn’t take much revving to tap into the juicy bits of the powerband, and the ZF 8-speed’s smooth action makes power management relatively thoughtless.
Multiple camera angles reveal the immediate surroundings on the nav screen, which helps me cut those 22-inch wheels close to rocks without scraping them — in turn, giving me confidence to roll a bit faster. There’s also information like suspension travel, steering angle, and incline/decline/roll angles that helps visualize the vehicle dynamics, some of which can be depicted on the heads-up display. Wheel articulation is a considerable 15 inches, which helps Velar take the rough way back down the mountain, where ruts and loose rocks are handled rather gracefully.
Though the Discovery is the more purpose-built offroader and bests the Velar when it comes to things like approach angle and wading depth, the new ‘ute actually reveals quite a bit of adaptability when negotiating a man-made course involving staggered and tilted ramps. Considering my Velar is rolling on road-focused wheels, its smooth operation and tight chassis suggests there’s a whole lot more offroad ability available for those willing to swap the city slicker hoops for something more aggressive. 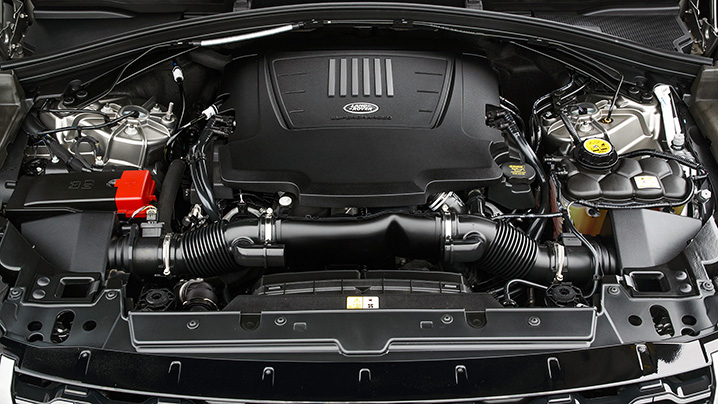 The vast majority of Velars will, of course, never get door handle deep in mud, which makes its on-road manners all the more crucial. Norway’s speed limits are shockingly low (and exceeding them by more than 12 mph can land you in jail). So while I didn’t push quite as hard as I might have in a more permissive environment, I briefly explored Velar’s saucy side (again, for science). With 380 horsepower propelling 4,471 pounds, Velar is capable of reaching 60 mph in 5.3 seconds. The sensation of acceleration isn’t remotely brutal or extreme, but rather a buttery waft of forward motion that’s managed by a smooth transmission and a linear powerband. Perhaps it’s the quiet cabin coupled with the refined engine sound, but the Velar simply doesn’t hit you over the head with overly eager acceleration.
The prevailing mood is regal, not rowdy, a quality you’ll also find when it comes to cornering, where Velar exhibits enough body control and grip to keep it feeling connected, but not abusive to its occupants. Air suspension smoothens out most of the major road irregularities, which helps the chassis feel generally un-flummoxed during hard cornering. Though it can’t stand up to the performance-focused Macan when it comes to outright handling, Velar manages to strike a favorable balance of ride quality and responsiveness, veering closer to the softer side.
Go full tilt, and dynamic mode keeps the engine on alert and revs high, and there’s also data such as a rolling graph of pedal effort and G-forces available. Want to control every driving parameter at once? The lower TFT screen can display steering, engine, gearbox, and other settings simultaneously, with easily switchable settings via virtual buttons. 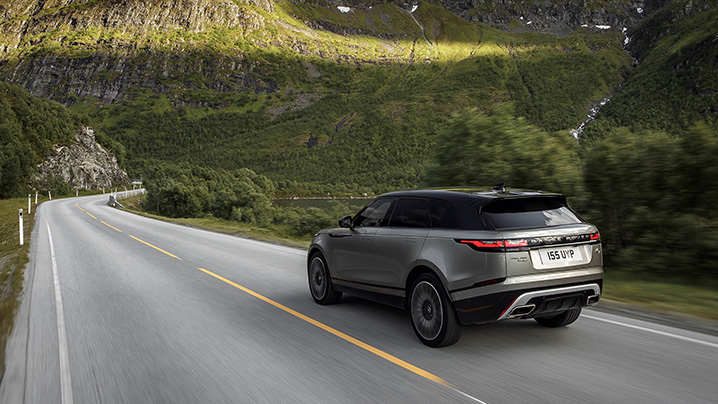 Supporting Velar’s theme of elegantly simple capability is an information architecture that doesn’t require so many sub-menus you’ll be cursing the day analog gauges and controls went by the wayside. With two rotary dials serving as multifunction controls and another small dial acting as a volume/power switch, the system doesn’t overly rely on the touchscreens, or having to dive deep into submenus to accomplish most tasks. While there is certainly something to be missed with the loss of easy-to-reach toggles, buttons and dials, the Velar’s electronics interface makes a strong case for a brave digital future.
Kill the Velar’s engine, and its numerous TFT displays go from vibrant color to blank black slates, an eerie sensory shift that’s akin to how an iPhone 7’s haptic home button dulls to an unresponsive surface when it’s been switched off. Yes, Velar relies on technology to engage its occupants, but, at least in the top trim level we tested, that bit of flash is backed by real world luxury and velvety driving dynamics. There’s also those hard-to-ignore area of styling, where Velar stands apart thanks to its impeccable proportions and striking understatement. I can’t speak for the more terrestrial gas and diesel versions, which start at around $50k, but my fully loaded tester inspired an emotion I rarely associate with sport utility vehicles: want.
Fuente: AutoBlog