Auto plants are being hit hard by addiction

It’s a Sunday afternoon in July, and the Union City Ball Fields are teeming with picnickers enjoying softball, face painting, trout fishing and even a semipro wrestling match. George Washington — that’s his real name — strolls through the crowd, shaking hands with people he recognizes from work at the General Motors truck plant or around town.
This is not a typical company picnic. It’s the 23rd annual Soberfest, put on by UAW Local 598 to celebrate plant workers and family members who have overcome substance abuse and addiction, and to extend a hand to those fighting it now. Washington, a GM employee-assistance representative and former addict, has spent many years on the front lines of the problem.
From his point of view, the auto industry has a more serious drug crisis today than ever.
“It’s not alcohol, it’s not marijuana now. You’re dealing with meth, you’re dealing with the opioids, you’re dealing with the heroin,” says Washington, who started at GM in 1977. “It’s starting to show up more and more at the automakers’ doorsteps.”
The Detroit 3, he says, are “going through a transition with all the buyouts and the changing of the guard, which means there is a lot of people retiring.” As a result, “we’re getting a work force now of a lot of younger people who are experiencing different drugs.”
Automakers have programs to help workers with addictions and mental-health disorders, but the programs aren’t necessarily equipped to handle the long recovery times that opioids require. And workers who fear for their job security are often reluctant to seek help, especially if they’ve lapsed more than once. Among the efforts to break the cycle of drug abuse is Soberfest, with the ballfields and picnic tables flanked by booths for community organizations such as Odyssey House, Serenity House and the Brighton Center for Recovery, where local native Eminem once checked himself in.
“This opioid addiction is one of the worst addictions I have ever seen,” says Washington. “It’s so tricky, it’s so powerful. They’ll go in, they’ll get clean. But then when the bottom falls out, it’s one of the most painful I’ve ever seen. They’re suicidal, they feel they’ve let everybody down, they feel they’ve let themselves down. I think it’s a lot more difficult to recover from.” 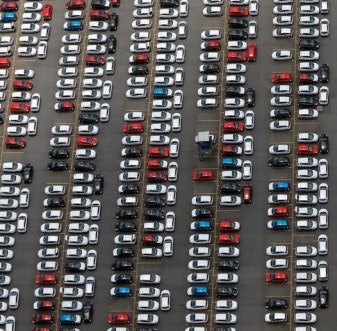 Report: Uncertainty and risk in the automotive industry

What is next for an industry entangled in changing geopolitical circumstances and faltering trade regimes?
Read more >

In the hot zone
Opioids are highly addictive pain relievers, ingested generally through prescription pills, though recreational forms — such as heroin — are injected. Even regular use of the drugs as prescribed can lead to dependence, according to the National Institute on Drug Abuse, and misuse can result in overdose and death.
Auto assembly jobs — physically demanding, with workers repeating motions and staying on their feet for long periods — create an environment in which opioid use can easily get out of hand.
“They’re doing eight, 11 hours a day,” says Kevin Bush, an employee support representative at Ford’s Louisville Assembly Plant in Kentucky. “Assembly work is very boring, very tedious. That kind of work causes many aches and pains in their body. Maybe they have a pain and the doctor prescribes opioids. And over a period of time the use of that creates a high tolerance and an addiction. And one thing leads to another and it gets worse.”
Misuse of the drugs and their deadly impact have spread across wide swaths of the country, including the industrial Midwest, Appalachian communities and rural areas from New Mexico to New Hampshire, along with pockets of major cities.
Drug overdoses are the leading cause of unintentional death for Americans under age 50. They killed 64,070 people in the U.S. last year — more than guns or car accidents — a 21 percent jump from 2015, the National Center for Health Statistics reports. Opioids are primarily behind the increase, with 15,446 deaths attributed to heroin, 14,427 to opioid pills and 20,145 from synthetic versions of heroin.

The auto industry’s manufacturing belt overlaps the hot zone for opioid abuse, with 28 assembly plants and more than 70% of Detroit 3 U.S. production located in states that have had significant increases in drug overdose death rates.

President Donald Trump declared the opioid crisis a public health emergency in October. An analysis released last week by the White House Council of Economic Advisers said the epidemic cost the U.S. economy $504 billion in 2015, six times more than estimated two years earlier, and that some 2.4 million Americans have an “opioid-use disorder.”
The auto industry’s manufacturing belt overlaps the hot zone, spreading southward from Michigan and clustered around highway corridors used by car carriers and drug couriers.
Plants responsible for more than 70 percent of the Detroit automakers’ U.S. production are in states identified by the Centers for Disease Control and Prevention as having statistically significant increases in drug overdose deaths in 2015, the last year for which data are available. All six of Fiat Chrysler Automobiles’ U.S. assembly plants, seven of Ford Motor Co.’s eight plants and eight of GM’s 12 plants are in those states. So are three of the four largest auto plants in the country: Nissan’s factory in Smyrna, Tenn.; Toyota’s in Georgetown, Ky.; and Honda’s in Marysville, Ohio.
On the factory floor
Inside those plants, each prescription written for pain pills on the company insurance plan is a chance for the crisis to spread.
“They’re bringing the pills into the workplace,” says Jodi Debbrecht Switalski, a former district court judge and prosecutor in Michigan who is now a consultant to employers on substance abuse. “Their tolerance quickly escalates. That’s where accidents, mistakes, injuries, aberrant behaviors start to occur. As tolerances increase, they must use more or they’re going to get very sick.”
Switalski heads a group of lawyers at Lippitt O’Keefe Gornbein in suburban Detroit specializing in opioid and controlled-substance misuse. Her team works with doctors, dentists, hospitals, opioid misusers and their families to resolve legal issues related to drug addiction. The goal is to establish procedures for companies to educate workers to prevent opioid-related incidents in the workplace.
“A lot of these cases are handled through workers’ compensation. But employee assistance programs, drug-free workplace programs, are just not enough,” Switalski says. “They’re not being implemented enough.”